If the idea of a menu comprised of a fusion between Japanese and Peruvian cooking sounds surprising to you, you’re not alone. Yet these two cultures have been fusing their culinary traditions since the 1800s in a style called Nikkei. And Kaiyo, a brand-new restaurant and bar, is bringing its own twist to Nikkei cuisine to Union Street’s diverse dining corridor.

The Japanese first immigrated to Peru in 1889 on two-year work contracts, lured by the promise of jobs. They worked in farming, mainly to harvest sugarcane, and helped to boost the country’s economy. After the contracts ended, many Japanese workers stayed on in Peru, starting families and integrating with society, especially in the area of food. Traditional Japanese cooking techniques combined with local ingredients to create Nikkei. Japanese cooks began to make traditional Japanese dishes like sushi, substituting fish for meat and using local ingredients such as potatoes, corn, peppers, and lime. And today, more and more chefs have begun to experiment with this Japanese-Peruvian cuisine.

Kaiyo, which opened in September, is owned and operated by San Francisco restaurateur John Park, co-founder of Whitechapel and Novela. Kaiyo’s concept, according to Park, is simple. “We are taking a contemporary approach to Nikkei, creating a menu that combines two cultures as well as creative cocktail choices to appeal to neighborhood Marina and Cow Hollow customers.”

Kaiyo’s front patio is welcoming, with brickwork and small tables; its interior, while just one room, features a long, well-lit bar, a 35-foot-long living moss wall that’s so green it looks like an oil painting, and two large, street-style paintings by artist Miss M. 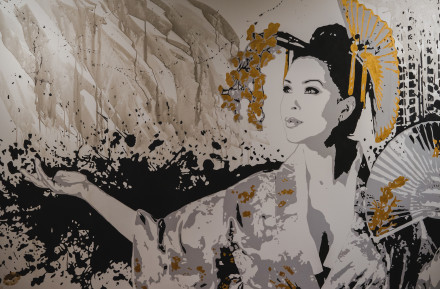 Neon lights complete the space along with natural wood, large and small tables, and handmade Parisian lanterns. Kaiyo’s two restrooms feature stunning art as well: street-art murals commissioned by local artist Lisa Pisa that tell the tale of her Japanese friend Satsuki. One depicts Satsuki’s life in Japan and her first visit to Peru, and the other portrays her journeys in Lima and her discovery of Nikkei cuisine.

Fanciful cocktails that play with ingredients, flavors and styles with a Japanese anime theme are the focus at Kaiyo’s bar. Drinks include the Kill Bill Vol. 1, with whisky, martini bitters, matcha, sarsaparilla, and soda ($12); Ghost in the Shell with vodka, sherry, tomato fino (sherry), elderberry, verjus blanc (white grape juice), and lemongrass oil ($14); and The Samurai Who Smells of Sunflowers with pisco, mandarin orange, shiso (a mint-like herb), lime, and tonic ($12). Other cocktails have equally exotic names like Artemis & Luna, combining pisco, sake, and white vermouth ($13). For those with simpler tastes, there are several local and imported wines, beers — including beer from both Japan and Peru — and a variety of sakes selected by sake sommelier Stuart Morris.

A TWIST ON THE TRADITIONAL

In the kitchen, chef Michelle Matthews oversees Kaiyo’s assortment of small and large plates, including sushi and sashimi, ceviche, and plates to share. Sample from a selection of delicacies such as Hokkaido scallops seared with pluot salsa ($19), smoked duck breast nigiri with foie gras and sherry reduction served over rice with vinegar ($7 for one piece; $21 for three pieces); and causa limeña, a traditional Peruvian cold potato entrée ($17). Ceviches range from a spicy halibut tiradito ($15), to an heirloom tomato ceviche infused with leche de tigre, kizami (a Peruvian seed) wasabi, and avocado ($14). Rolls take on a more traditional form, such as a shrimp roll with shrimp tempura, tuna poke, and avocado ($17), and a bluefin tuna roll with green onions and pickles ($14). Shared plates include a lobster “paella” with rice, saffron, lobster consommé, miso paste, and sake ($19) and crispy pork belly with a sweet potato purée and quinoa ($28). Sweets are simple: a caramelized plantain and mozzarella cheese cake ($8), and matcha panna cotta with mango and passion fruit ($9), respectively. The menu is likely to change seasonally.

All of these blended seasonings, ingredients, and cooking styles result in truly one-of-a-kind dishes that will pique any palate. Don’t miss a chance to experience Nikkei cuisine for yourself at Kaiyo.