A holiday tea party and a dear john letter

The other day I was invited to a tea party. Now, I don’t usually go to tea parties — not my cup of tea, I am emboldened to add. As you may know, I’m more of a saloonist than a teapartyist. But because this particular tea party was going to be at the Top of the Mark, 19 floors up in the Mark Hopkins Hotel, I decided to attend and to engage in some serious reminiscence.

In 1946, I went to the Top of the Mark with my girlfriend the day before I shipped out for Okinawa as a private in the Marine Corp. In those days, servicemen going overseas from San Francisco to the Pacific theater considered it a rite of passage to have drinks at the Top of the Mark with their sweethearts — newly found or steady — and look out at the Golden Gate.

DEAR JOHN
Three months after my Top of the Mark date with my girlfriend — after chasing down scared Japanese soldiers who had refused to surrender and were hiding out in the north end of the island and giving us the illusion of war — I heard my name shouted at mail call. On that day, I got The Letter, the famous “Dear John” letter. The girlfriend was getting married to some other guy from her high school class. I got over it. When I returned from the Pacific, I went back to the Mark Hopkins, took the elevator up to the Top of the Mark, and had a couple of big ones. 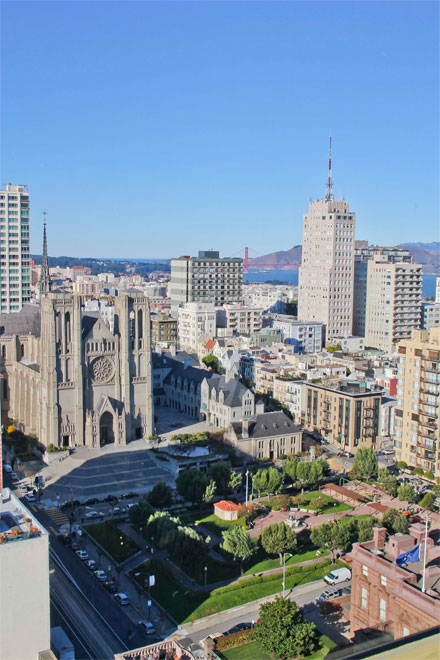 The view from the top of the Mark Hopkins Hotel

THE MANSIONS OF NOB HILL
The history of the landmark Mark Hopkins Hotel on the crest of Nob Hill is another of those San Francisco Gold Rush tales we all love. Mark Hopkins was one of the founders of the Central Pacific Railroad that helped stitch trade and commerce from the East Coast out to the wild, Wild West. Hopkins, an opportunistic merchant, left New York City by ship in 1849 and sailed around Cape Horn to San Francisco. He became one of the so-called Big Four along with Leland Stanford, Charles Crocker, and Collis Huntington. The Big Four became conspicuously wealthy beyond their dreams and built mansions on Nob Hill. The ornate Hopkins mansion survived its owner, who died in 1878. The building made it through the 1906 earthquake but burned to the ground in the fire that followed. And in 1926 mining engineer and hotel investor George D. Smith, opened the Mark Hopkins Hotel. Famed San Francisco moneyman Lou Lurie bought it in 1962, and the InterContinental Hotels Group bought it in 1973. It now has landmark status as one of the Historic Hotels of America by the National Trust for Historic Preservation. The hotel certainly provides historic perspective to the life of a certain callow youth who shipped out after sipping a few gin fizzes with his high school sweetheart.

TEA AT THE TOP
Oh yes! The tea party.

Each year the iconic hotel celebrates the holidays with a series of events, including special Thanksgiving and Christmas dinners, holiday brunches, buffets, and tea parties. The tea party I attended was a press event to kick off the holiday season, which at the Mark Hopkins started late last month and will run through New Year’s Day 2014. We were all there with our notebooks to road test the Holiday Tea Party at the Top of the Mark. It’s an adult kind of tea party, and Champagne is available to get merrymakers merry. Fifty bucks per person with all the champagne you can drink. The hotel’s executive chef, a European trained Serbian, Nenad Stefanovic, was there to ease our way through the tea sandwiches, French pastries and English scones served with Devonshire cream, fresh preserves and lemon curd. There are eight different types of tea. There’s a kid’s tea party, too — scratch the Champagne. And that’s 40 bucks per kid.

SQUEEZING AT THE BAR
A young Sri Lankan woman, Nelum Gunewardane, dropped by our table, and we got to talking about the old days. That is, I got to talking about the old days and she graciously played along. You know you’re a senior kind of guy when the G.M. of a leading San Francisco hotel is a good-looking youngster from Sri Lanka. “Where’s the bar?” I asked her, slipping back in time a bit.

She said it was around the corner behind a huge, mirrored, floor-to-ceiling wall. I excused myself and got up to look. Sure enough, there was an eight-stool bar. No G.I.s, but a few tea-party fugitives. I took a drinks menu and went back to the tea party.

In the old days, I told Ms. Gunewardane, there was a huge oval bar right in the center of the room. Officers and enlisted men rubbed shoulders at this bar, squeezing their sweethearts and pointing out the Golden Gate Bridge. That was then. This is now.

100 MARTINIS
Later I scanned the drinks menu. The “cocktail program” — as most new bars are proclaiming boastfully now — offers 100 martinis. Each one, no matter what the brand, is 14 bucks. On the rocks or straight up. What a wonderful world.

I thought it was a great tea party, and you can quote me. Contact the InterContinental Mark Hopkins Hotel for details about their fine holiday activities (888-424-6835, www.intercontinentalmarkhopkins.com).

But I spent most of my time looking out the windows to the Golden Gate and thinking about that “Dear John” letter.

Tweet
Send to a Friend Print
Our columnist invites Dear John Letter recipients to meet at the Top of the Mark after the holidays and get to work on those 100 martinis. E-mail: [email protected].