When most people think of Belgium, waffles, beer, and chocolate come to mind, but Belgian cuisine is actually far more complex. Noted for its wide array of ingredients and dishes that vary broadly by region, Belgian dishes are also heavily influenced by neighboring France, Germany, and the Netherlands. It is often said that Belgian cuisine has the heartiness of German food presented with the elegance of French technique. At Belga, the newly opened Belgian brasserie from famed restaurateur Adriano Paganini (Delarosa, Super Duper Burger, Beretta, Lolinda, Starbelly) in the former Café des Amis space at 2000 Union Street, the concept goes a step further by adding a California twist to some traditional dishes.

CHEF HAS WORKED WITH THE BEST

Executive chef Freedom Rains (yes, that’s his real name) started his career in San Francisco working seven years with internationally renowned chef Nancy Oakes at Boulevard. He moved on as sous chef under chef Thomas McNaughton at Flour + Water, learning whole-animal butchering. After traveling through Italy and a stint at RN74, Rains accepted his first chef de cuisine position from chef Chris Cosentino at the acclaimed Incanto, where he learned Cosentino’s philosophy of using every part of the animal, including elevating offal (organ meats and entrails), an area of modern American cookery that Cosentino helped pioneer.

BELGIAN CLASSICS WITH A TWIST

Belga’s menu reflects all of Rains’ previous experience in his interpretation of traditional Belgian food with a twist. For example, in Belgium white asparagus is served Flemish style, boiled or steamed and served with chopped hard-boiled eggs and clarified butter sauce. Rains’ version is a salad of seasonal green asparagus, celery hearts, and sauce gribiche (an acidic aioli). Croquettes (breaded and fried cylinders of deliciousness) are popular throughout Belgium, with the most popular versions featuring either a thick, creamy cheese or a grey shrimp filling. For his croquette filling, Rains uses brandade (emulsified salt cod). For Belgians, Flemish carbonade (beef stew with beer) is an obsession, and locals believe in washing it down with the same brew you find in the gravy. While there are numerous carbonades (also known as stoofvlees), essentials include beef, onions, dark beer, mustard, sliced bread, and various herbs and spices. At Belga, you’ll find boneless short rib, bacon lardons, mushrooms, baby carrots, pearl onions, and marble potatoes braised with veal stock and beer.

Rains will utilize the wood-fired grill for house-made sausages like currywurst, boudin blanc, and boudin noir and meats like the rib eye steak for two and the shoulder-cut pork chop. Charcuterie is also made in house, including porc roulee (pork head), liverwurst, saucisson sec (thick, dry-cured sausage), and country pâté. Vegetable options include braised cabbage with späetzle, stoemp (mashed potatoes and melted leeks), and cauliflower with vadouvan (French version of Indian masala), golden raisins, and almonds.

Rains finds inspiration in another Belgian icon, the humble mussel, and serves it three ways: dry roasted in cast iron and tossed with clarified butter; pan roasted with white ale, shallots and green garlic; and in a light seafood chowder with cod, clams, cream, white wine, and grilled bread.

In addition to substantial mains, Belga also serves light snacks, encouraging guests to feel at home whether they’re having a dozen oysters and a glass of wine at the bar solo after the gym or sharing all three mussel preparations with a group of friends. Prices are friendly, too (where else can you get a wood-fire grilled seven-ounce steak au poivre with frites for under $20?), keeping with Belga’s concept of a comfortable place where singles, couples, friends, families, and neighbors will become regulars. The interior renovation enhances that approachability — gone are the claustrophobic partitions from Café des Amis that hid views of the surrounding streets. Sea foam-hued penny tiles line walls near the kitchen and bar; colorful custom artwork evokes European graphic collage; and industrial textures and finishes add a sleek, mod touch. Outdoor seating (coming soon) will feature sunny yellow tables to match the awning.

Perhaps the most potent symbol of change is the wood and glass cabinets that once held wine for Café des Amis now hold Belga’s ample selection of beers, curated by bar manager and certified cicerone (a sommelier for beer) Ryan Murphy, who studied under Rich Higgins, one of seven master cicerones in the world. Belga features 50 bottles and 10 drafts, including a diverse collection of Belgium’s beers, Belgian-style beers from California, and ciders sourced from Flanders, Normandy, and the United States. There are familiar labels as well as rare, seasonal, and pricier “celebratory” choices. The beer and cider menu is cleverly arranged in order of intensity (Light, Hoppy, Malty, Funky, Fruity, Sour, and so forth) and intended for pairing with chef Rains’ food.

You’ll also find wine varietals from France, Germany, and the United States and a selection of bubbles by the glass and by the bottle. There is a full bar and Nora Furst has designed a gin-focused (gin is popular in Belgium) cocktail list. Furst, who runs the bar programs at Lolinda and El Techo de Lolinda, and recently implemented a grappa and amaro beverage menu at Delarosa (see sidebar), has a knack for creating light, fresh drinks that don’t knock you off your barstool. If you want to be knocked off your barstool, however, try the beer and a shot combo called a “kopstoot” (which translates to “head butt”). 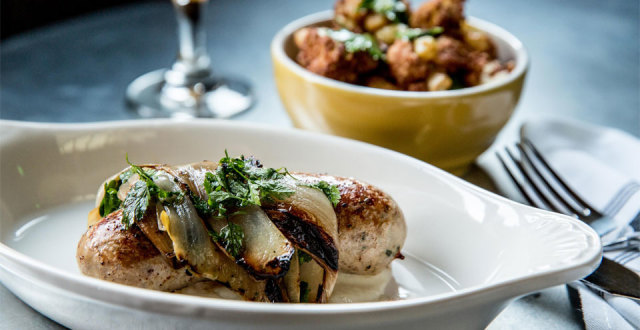