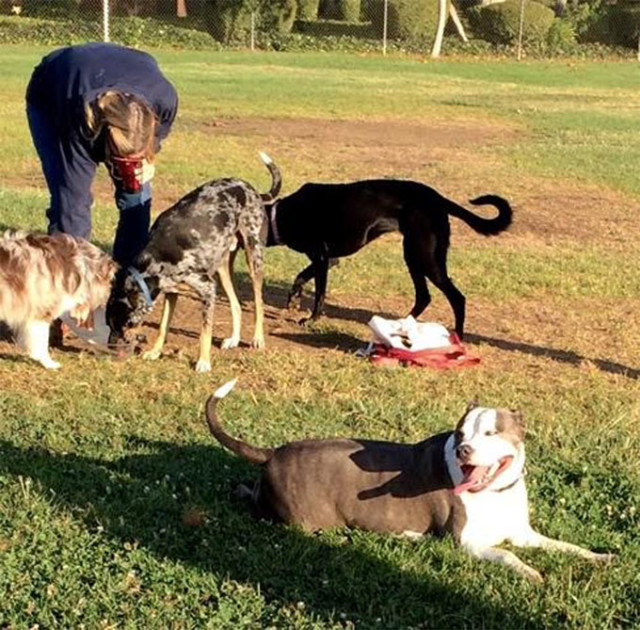 Skylar plays hard-to-get while her hound dog love, Mako, gets some water.

I don’t want to say that Skylar Grey is kinky, but when it comes to romance, she definitely has her quirks. At the tender age of 6 months, I noticed that she had a thing for grey muzzles.

It started with Preston, the 12-year-old black Lab who lives kitty-corner from Kickie’s house in San Jose. On a walk to the park one summer afternoon, Sky spotted the handsome older fellow lounging on the lawn while his dad, Renee, worked on a car. As we passed in front of the driveway, Skylar started doing her famous twirls, bouncing from left to right and right to left until she was completely entangled in her leash. Preston wasn’t impressed. “He’s old,” Renee said. “Hey Preston, look at that pretty girl!” Preston cocked an eyebrow and slowly stood up. I let Skylar off the leash and she ran up to Preston with that Eighth Wonder of the World tongue unfurled in all its glory. As Preston backed away from the whirling dervish, she was undeterred, sliding under his chin and lapping at his mouth. At first Preston didn’t know what to think of the big sloppy kisses, but after a minute or so he grew annoyed, let out a growl, and flashed his front teeth. Sky was familiar with that look because she got it often from Blue. Steve and I call it “The Vampira” — top lip curled up and teeth fully bared. Skylar rolled over on her back to show Preston that he was the boss.

Several weeks later, we attended the casual Saturday morning puppy meet-up in a field next to the school. A strong, much older alpha husky named Luke caught her eye. Again, she twirled her way toward him and in one fell swoop ducked under his chin and started lapping at his mouth. Luke, unlike Preston, seemed to enjoy the adulation. “That’s a sign of submission,” someone said. “She’s letting Luke know that he’s the boss.” That seemed to be a recurring theme with Skylar.

STRIKES OUT WITH BEAR BEFORE BUDDY

After Sky had surgery for elbow dysplasia, she started swim therapy at AquaDog. Most of the dogs that come to see therapist Connie Frank are older, and many are Labs and shepherds, including Connie’s own dog, a 10-year-old German shepherd-Great Dane mix named Bear. Every time we visited, Skylar went crazy trying to get over to Bear, but her feelings were unrequited. Bear didn’t just ignore Skylar — he went out of his way to avoid her. “Miss Sky, you need to learn the art of playing hard to get,” Connie said as Skylar swam in the pool, her big green bug eyes fixed on Bear. The good news is there were plenty more dogs in the pool, and one, a sweet yellow Lab named Buddy, actually liked her pestering. Skylar would lie down beside Buddy and bestow her strange fetish upon him: incessantly licking the inside of his mouth. “Gross,” Buddy’s dad said. “I feel like I’m watching puppy porn.”

Just when it seemed Skylar was only interested in finding a sugar daddy, along came Mako, a pretty-boy hound mix just six months older. “She usually likes Labs and shepherds 6 years older, or even 10 years older, so this is very interesting,” I said to Mako’s dad. “Well,” he said, “Mako is a charmer, that’s for sure.” As Skylar followed Mako around the field, it was obvious she still hadn’t learned to play hard to get. After half an hour, Mako grew bored with her and galloped off, nose to the ground, looking for gophers. “Give him some time, Sky,” Mako’s dad said as Skylar plopped down beside us tuckered and dejected. Then, from across the field, Mako looked up and realized his shadow was missing. He spun his head from side-to-side, big hound ears flopping in the wind, and then he spotted her. “Don’t you even think of chasing him, Missy,” I said sternly. Suddenly Mako was lumbering toward us. “Now ya see, Sky? You’ve piqued his interest,” Mako’s dad chuckled. “There’s no reason a pretty little girl like you should have to do the chasin’…” Mako hurled himself at Skylar and the two tumbled on the ground a bit, then Skylar did the play bow and took off with a serious case of the “zoomies,” her butt tucked under as she darted around the field with Mako in tow.

When we returned after two weeks in San Francisco, I wasn’t sure if Mako would still be waiting or if he had moved on. As we got closer, I spotted Mako running toward Skylar and the two lovebirds met, tails wagging a mile a minute as they ran side-by-side along the chain-link fence until Skylar was inside. I greeted Mako’s dad and we watched Sky and Mako run and play in the field until they collapsed, exhausted, at our feet. That’s when Skylar moved in for some sloppy kisses. “Makin’ out with Mako,” I said. “Yep,” Mako’s dad laughed. “I guess she’s done with older men.”