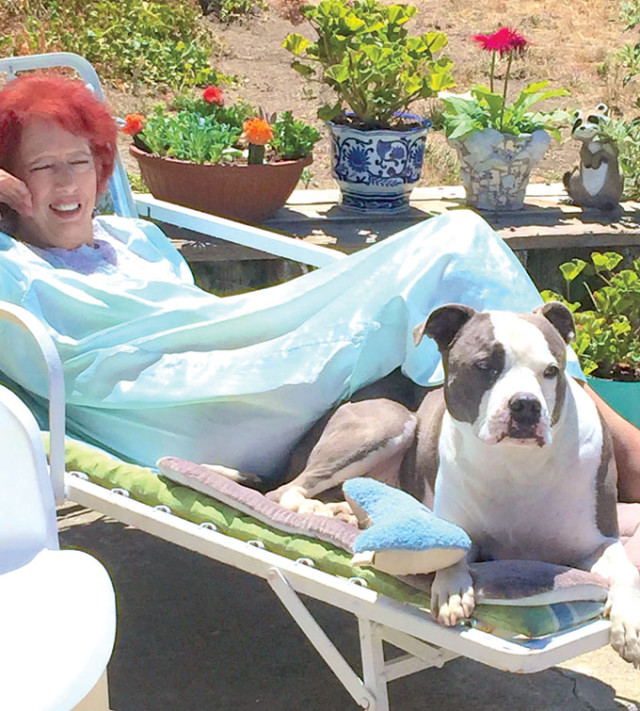 Kickie and Skylar in the garden.

je ne sais quoi
noun, French.
An indefinable, elusive quality, especially a pleasing one: She has a certain je ne sais quoi that charms everybody.

Just weeks before kickie passed away, I made an appointment for Skylar to see Dr. Andrew Sams, one of the best canine orthopedic surgeons in the country, at his eponymous clinic in Mill Valley. I was certain she needed surgery — TPLO to be exact, or tibial-plateau-leveling osteotomy, a procedure performed on dogs to stabilize the stifle joint after ruptures of the cranial cruciate ligament, similar to the anterior cruciate ligament (ACL) in humans. At the same time, I made a surgical appointment for a week later. Let’s just say this isn’t my first rodeo — Jazzy had two TPLOs, and this would be Skylar’s second, not to mention the elbow dysplasia surgeries done at once on both her front legs. Unfortunately, bully breeds are susceptible to ruptures, as are Bernese mountain dogs, Rottweilers, golden retrievers, and Labrador retrievers, among others.

Like with Jazzy, I did a DNA test when I adopted Skylar. The results for Jazzy — 60 percent American Staffordshire terrier, 20 percent Rottweiler, and 20 percent bull mastiff, with a smidge of Glen of Imaal terrier — were somewhat surprising, as I wrote in a chapter of Jasmine Blue’s Tails of the Dog Park called “There’s a Glen of Imaal terrier in the woodpile.” Skylar’s DNA isn’t as mixed — she’s a whopping 75 percent American Staffordshire terrier and 25 percent wirehaired vizsla.

While Skylar looks pure pit bull, some of her personality traits scream wirehaired vizsla, which are known to be gentle mannered, shy with strangers, affectionate, sensitive, expert swimmers, and “possessed of a well-developed protective instinct.” When I was burglarized in 2010, Jazzy was home. Fortunately, the thieves didn’t hurt her, but they did take all my stuff, leading to a chapter called “The pit bull showed them the silverware.” Fact: Pit bulls make terrible watchdogs because they love humans far too much. While Skylar is three-quarters pit bull via the Am-Staff, she’s all wirehaired vizsla when it comes to protecting the house, as I found out when she cornered the gardener in the backyard after I let her out not knowing he was still there.

Back in Mill Valley, Dr. Sams confirmed my fears, and Skylar had TPLO surgery on her left knee the following week. She did great, and after a couple days’ rest in Mill Valley with Steve and Blue, we headed back to San Jose to start the long recovery. Entering the house after two weeks away felt so strange. We had planned for Skylar to sleep on the floor of Kickie’s room on her dog bed like she had for the first TPLO, something Kickie was looking so forward to. Instead, I helped Sky up the sturdy steps to my bed, the same steps Jazzy had used before her. The back patio was filled with bamboo leaves — the bane of Kickie’s existence — and I felt her firm presence while I swept every last one of them away.

As I stood in the kitchen preparing Sky’s pills in gobs of peanut butter, I heard her barking, and then there was a knock at the door. It was an older gentleman with a walker and his slightly embarrassed adult daughter. “My dad says he used to know the woman here and he insisted on visiting,” she said. I told them that Kickie was my stepmother and that she had passed away on Feb. 6. We were all silent for a moment. “My mom passed last year,” the daughter finally said. “My dad hasn’t been out much since, but today he wanted to take a walk, and he wanted to visit your stepmom.”

I remembered Kickie talking often about an older Japanese neighbor who would visit and bring things from his garden. “Are you the man who used to bring Kickie cucumbers?” I asked.

“Well, Kickie said they were the best cucumbers she ever had, and she talked about them all the time,” I told him, and his eyes lit up again.

“She used to do yard work in these thin nightgowns,” he said, his smile growing even broader. “That was really something.”

His daughter grabbed his arm. “Dad!”

We all laughed, albeit a little awkwardly.

“She said you used to flirt with her,” I teased.

He nodded earnestly. “Who wouldn’t?”

Mind you, this happened when Kickie was well into her seventies. She had that certain something, that je ne sais quoi, as they say — indefinable, undeniable, unforgettable charisma, confidence and charm, a beauty, inside and out. I don’t know any other seventy-something-year-old woman, quite frankly, who could wear a thin nightie while raking the yard and have a man remember her a decade later.

When I went back inside the house, bamboo leaves were already flitting along the patio in the cool breeze. I looked up, smiling. “You were something else, Kickie,” I said out loud. Then I grabbed the broom and started sweeping.