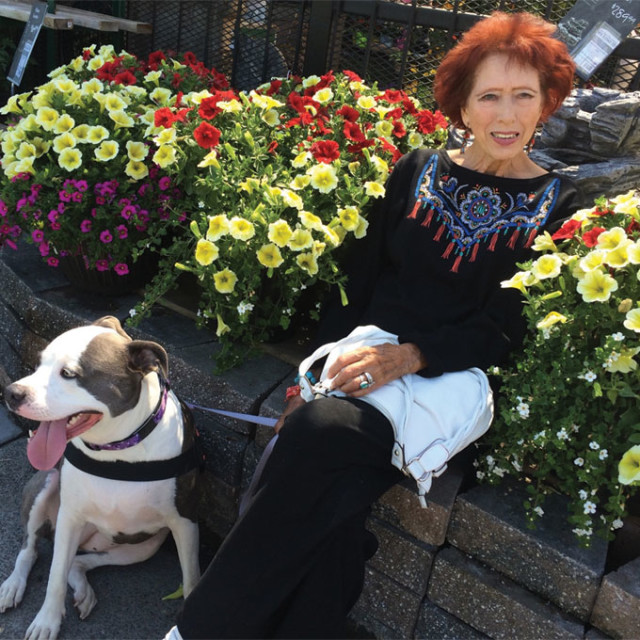 Kickie, at age 85, with Skylar

How the birds sang in the morning,
how the dog barked in the yard,
I guess that’s nothing much,
but everything to us,
and that’s what seems so hard
How will we smile ever again?
I’m asking you sincerely, my dear old friend
The moon on the hill says we probably will
My dear old friend
— “My Dear Old Friend,” by Patty Griffin

I always took Kickie out for lunch and shopping when I visited her in San Jose. She would greet me at the door dressed to the nines, her accessories color coordinated with her outfit, right down to her shoes. “How do I look?” she would ask coyly as she did a little catwalk twirl. “Beautiful,” I would say, “just like always.”

The routine stretched back more than 20 years to when my father was still here and the three of us (or the four of us if I had a boyfriend at the time) would head over the hill to Santa Cruz, where Kickie and I would shop while the boys had beers at the Catalyst. Later we would listen to a local band called Wally’s Swing World while Kickie and my dad hit the dance floor. I have fond memories of those excursions, but in recent months when I asked about lunch, Kickie always said no: “I’m just too tired, honey.” At 86, it wasn’t surprising she was slowing down, but Kickie’s looks and sense of style had been her identity for more than eight decades, and as those things faded, so did her lust for life. Even her usually hearty appetite had disappeared. “Suzie, I’m ready to go,” she would tell me sometimes when she was feeling particularly down.

One chilly night in late January she called me into her room. “I don’t feel well,” she said, clutching her stomach. Knowing Kickie’s penchant for drama, I asked if she wanted me to call an ambulance. Normally, she would say no and half an hour later she would be fine, but this time she said nodded yes. At Kaiser Hospital, the emergency room doctor said her liver function was low and he wanted to keep her overnight, which stretched into days. The nurses said the only thing she talked about was my pit bull, Skylar Grey, and they allowed me to bring her for a visit. It was good for them both because Skylar was confused and lost at home without her “Grammy,” sniffing at her pillows and sleeping snuggled in her blankets on the couch.

A few days later the doctor told me that Kickie wasn’t going to get better. I was in shock. I had never pictured my life without Kickie. She was more than my stepmother; she was my friend — my dearest friend. Over the years we laughed and fought and cried together; I taught her to love Warriors basketball and pit bulls and she taught me to love southern classics like grits and skillet-fried chicken. She yelled at me for not keeping the house and the garden perfectly the way she did. I reminded her that I had to take care of her on top of working. “You don’t work,” she would say, “You go to restaurants and write about them and you write about Jazzy and Skylar…” I would throw my arms in the air and roll my eyes. “That is work — that’s what I do!” For all the fights we had about writing not being a real job, I would hear her on the phone with her best friend Betty telling her how talented I was. “Suzie is a beautiful writer,” she would say. “I just wish she could clean the toilet half as well.”

Kickie told the doctor she wanted to come home, and Kaiser arranged for hospice. She was still lucid, though complaining about not being able to breath. “That’s anxiety,” the hospice nurse told her as she adjusted the oxygen tank. “You’re getting plenty of air. Try to relax.” They set up the hospital bed in the living room facing the windows so Kickie could look out at the hills she loved so much. The nurse increased the anxiety and pain medications until she finally fell asleep. The next morning Steve took Skylar and Blue for a walk and I sat for a long time holding Kickie’s hand. I told her all the time how much I loved her, but I told her again anyway. When the nurse arrived, she asked Steve and me to step into the other room. “It won’t be long,” she said. A few hours later, Kickie passed away in her sleep.

The next morning Skylar woke up, grabbed one of her toys, and headed for the closed door of Kickie’s room as she always did. “Grammy’s not there,” I told her, and opened the door so she could see for herself. After sniffing the pillows, Sky headed to the living room and stood in the exact spot where the hospital bed had been. She turned in a circle and, still holding her toy, looked up toward the ceiling. “Yes, that’s where Grammy is,” I told her. “Grammy is up in Heaven.” After that, Skylar never looked for Kickie in the house again. The bond they shared was unlike any I’ve seen between a dog and a human — a truly special love — so I don’t believe for a minute that Sky doesn’t miss Kickie. But I do believe that dogs know more than we do about human souls, and the way the spirits of those we love live on forever in all of us. 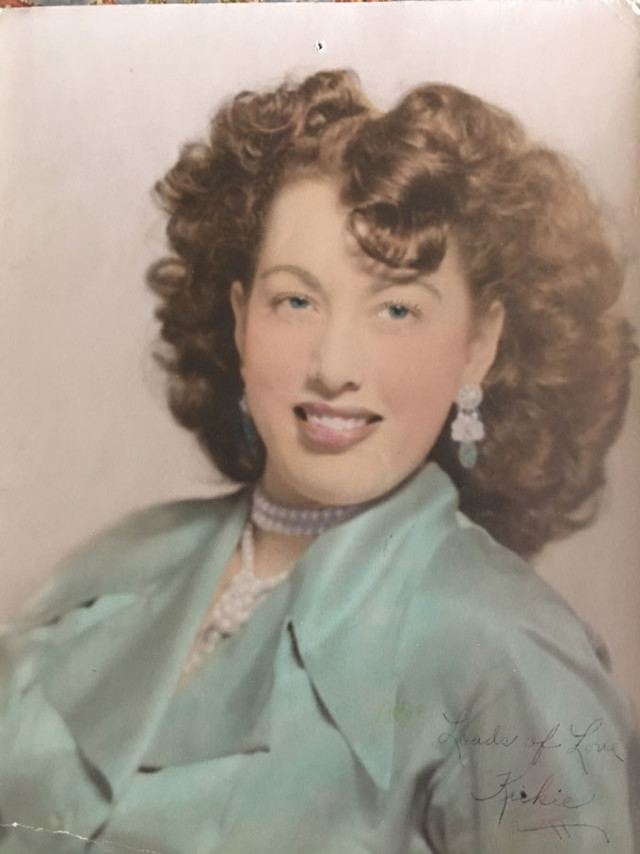