Let’s talk about trends, shall we? The beginning of 2015 is an excellent time to discuss some new things happening in the food world, and look to what might be coming in the new year.

After years of increasingly casual restaurant experiences, it looks like elevated tableside service is back, as diners start looking for quality hospitality to match quality food. Gaspar Brasserie offers tableside cocktail service of their Café Brulot, a flaming coffee cocktail for two that originated in New Orleans with coffee, clove, orange peel, and lots of live flame. At The Progress, the brand-new project from Stuart Brioza and Nicole Krasinski of State Bird Provisions, a pork broth is poured over miso sausage meatballs, pumpkin mochi, kimchi, fresh-grated pumpkin, black butter, and fresh pumpkin oil at the table.

Which brings us to another trend we’ve seen cropping up: large format communal dining, particularly large cuts of meat. After years of small plates designed for sharing, it looks like large plates designed for sharing are the new rage. Instead of serving lots of little dishes, à la State Bird, many new restaurants are offering large plates, served family-style. Think whole braised goat, leg of lamb, and whole birds. That’s the format at the brand-spanking-new The Progress and is an option at Game, and will be the idea at Dirty Water, opening in Mid-Market in 2015.

This goes along with another trend that is cropping up everywhere, the large format cocktail. It often appears as a punch bowl, or prebottled cocktail. This is not the scorpion bowl of your college days, but a modern take on a cocktail intended for a group to enjoy together. Dirty Habit, the very packed, very hip new bar and restaurant in the former Fifth Floor space in the Hotel Palomar, is offering these large format drinks, but they are anything but stuffy. Check out the Karl “The Fog” Cutter, made with Denizen rum, Cutty Sark prohibition scotch, orange, orgeat, and lime — it packs quite a, um, punch.

Vegetable-focused cooking has been on the rise for a couple of years now, and it seems each year brings a new “it” vegetable. Everyone knows about the ongoing trend that is kale, of course, and we won’t try to predict the “next big vegetable.” Let’s just say that vegetables are here to stay, and we couldn’t be happier about it. But it’s good to remember that just because a chef or restaurant is paying close attention to vegetables doesn’t mean meat is ignored; rather, vegetables and meat are given equal attention. Verbena, from Gather’s Sean Baker, is one such place: vegetarians, meat eaters, and true omnivores will all be happy here. 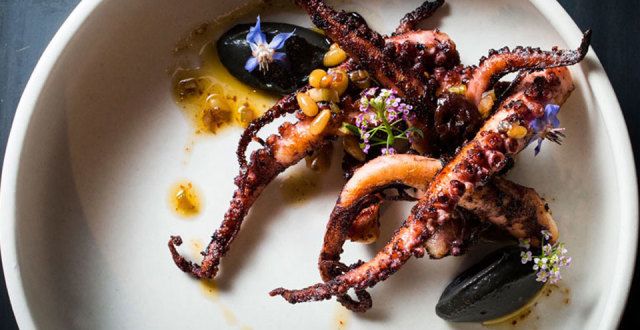 The publication of Yotam Ottolenghi’s most recent Plenty More as a follow-up to 2011’s Plenty and 2012’s Jerusalem only confirms that richly spiced and seasoned vegetable-focused dishes are here to stay, and the flavors of the Eastern Mediterranean are especially suited to this new vegetable focus. We’ve seen these flavors appearing on menus at restaurants throughout San Francisco and the Bay Area. Ingredients that have particularly stood out include savory-spiced yogurt, the addition of sumac berries in dishes, and saffron in baked goods. Want to add some of these flavors to your home cooking? Spice up simple roasted root vegetables like carrots and parsnips with spiced yogurt. Stir a teaspoon of cumin, smoked paprika, and a dash of Aleppo pepper and salt into a cup of whole Greek yogurt. After roasting the vegetables, drizzle over the top and sprinkle with herbs to serve.

Another trend in the more healthful direction is a move toward whole grains. As conversations about health concerns and gluten continue to escalate, one thing that seems clear is that whole grains, “heritage” grains, and other alternatives to processed white flour are wildly popular — and definitely better for you. There are, of course, lots of health benefits, but also incredibly rich flavors that chefs can’t get enough of. Nicolaus Balla and Cortney Burns at Bar Tartine have started using even more interesting grains in their dishes in the last year, and have been experimenting with sprouted grains and seeds. The publication of their new book, Bar Tartine: Techniques and Recipes, offers some great tricks and tips for bringing home some of their whole grain techniques. We’re also seeing whole grains pop up in porridge. Yes, you read that right: Dickensian porridge seems to be the latest “peasant” food to make the leap to high-end dining. It’s appeared on menus all over town, including a hen-of-the-wood mushroom version at Alta CA, as well as others at Game and Spruce. They’re usually made with richly flavored whole grains, like farro, cracked whole wheat, rye, and many more. We anticipate this comfort dish will be making appearances in many forms — and using increasingly unusual grain combinations — in the coming year.

And last but not least, it seems this is also the year of the modern French bistro. Americans have had an interesting relationship with French food in recent years: On the one hand, France is a culinary mecca; on the other, French technique and structure has seemed a bit stuffy to many of the new crop of young chefs and diners. But with the opening of Monsieur Benjamin from Corey Lee on the high end of the spectrum, to Le Marais Bistro & Bakery on the more casual side, we may be seeing a full-on trend in the works. The twist is that while these places are grounded in French technique, chefs are not afraid to take on the more daring flavors of California — and that’s definitely a good thing.

Tweet
Send to a Friend Print
Dana Eastland is the associate editor of the Tablehopper, a weekly food and restaurant e-column. E-mail: [email protected]