Moviemaking in San Francisco: A love affair with Hollywood

This is the second of a three-part series.

Here’s an overview of Part 1:

San Francisco narrowly missed becoming the film capital of the world. Perhaps it’s just as well. The city has enough narcissism and other “isms” without being Hollywood by the Bay. Nevertheless, San Francisco, in fact most of the Northern California Bay Area, has had a long love affair with the movies.

Ambitious and wanting a piece of the motion picture action, in 1902 four San Francisco brothers, Harry, Herbert, Joseph, and Earle Miles organized a company to rent films to exhibitors. This was a revolutionary idea at a time when exhibitors purchased movies directly from the manufacturers. In addition to their rental business, they formed the Miles Brothers Motion Picture Company. Soon they were making simple, single-reel travel films. Then, in 1905, planning to add fictional story lines to their films, the brothers built a complete film studio in San Francisco on Mission Street. Bad timing: April 18, 1906 changed everything. The catastrophic San Francisco earthquake and fire stopped motion picture making in Northern California for several years. Meanwhile, Southern California became dominant in filmmaking.

In 1912 San Franciscan Herbert Payne, heir to a Comstock mining fortune who identified himself as a “clubman,” founded the California Motion Picture Company just north of San Francisco in San Rafael. Payne capitalized the company with $1 million (big money at the time) and became president. He allied himself with George E. Middleton, from a prominent San Francisco family who operated an automobile agency on Van Ness Avenue. Middleton would become executive producer. Alex Beyfuss, an advertising executive, was the company’s chief accountant.

Though the California Motion Picture Company (CMPC) began making short films promoting the Middleton auto agency, by 1913 it was talking about going “big time” with full-length features. Middleton met a seductive Latin musical comedy star, Beatriz Michelena, who was the featured celebrity at the San Francisco Automobile Show in 1913. He married her and the fledgling film company had its star. It billed her as “The California Prima Donna” and in 1914, Salomy Jane, from a story by Bret Harte, was released in a burst of publicity. The film was, as they say, a box office smash. After that, The California Prima Donna starred in almost every CMPC film. Middleton turned out to be a good director and Michelena, a fine actress, albeit in a bravura, musical comedy fashion.

But it was just not to be. The Southland was rising. Hollywood film magnets like Adolph Zukor, William Fox, Carl Laemmle, and Jesse Lasky, who was born in San Francisco, not only made movies but also controlled distribution outlets. Payne, Middleton, Michelena, and Beyfuss were left without sufficient theaters in which to show their films. The last CMPC film was Flame of Hellgate. The beauteous Michelena played a dance-hall girl. But that was the end. The company closed in 1917. Middleton and Michelena divorced. He went back to the automobile business. She went back to the stage for a while and spent her final years in Spain. Though details are sketchy, film historian Geoffrey Bell in his book The Golden Gate and the Silver Screen (Fairleigh Dickinson University Press, 1984), states that Payne and Beyfuss “both, in time, were reported suicides.”

Even though Southern California and the major studios with their chains of exhibitors were ascending in the early 1900s, the San Francisco Bay Area continued as a center of filmmaking activity. All through the years of the silent films, there were studios here. Not only the California Motion Picture Corporation in San Rafael and Essanay in Niles Canyon, which finally shut down in 1916, but also the Leon Douglass Natural Color Studio, which produced some of the very early color motion pictures, Vim Motion Picture Company in Alameda, and others.

The imperious director and actor Erich von Stroheim made one of his great films, Greed, in San Francisco in 1923. He took the novel McTeague, written by San Franciscan Frank Norris in 1899, and developed his own screenplay. A stickler for authenticity, von Stroheim found a two-story, 19th-century building at the corner of Hayes and Laguna Streets and used it as the principal location for what critics agree was the director’s masterpiece. The mercurial von Stroheim, hell-bent for realism, made his actors live in the rooms he used as the setting for much of the film. The building at Hayes and Laguna gained fame. It was reported by historian William M. Drew that in the late 1960s and early 1970s it was a brothel. Greed was seven hours in length. The autocratic director shortened it to four hours. After it had been further reduced against his will to 100 minutes, it was finally exhibited. When asked by the show business, trade publication Variety how it would be possible to screen a movie almost eight hours in length on one evening, he replied, “That is a detail I hadn’t time to bother about.” 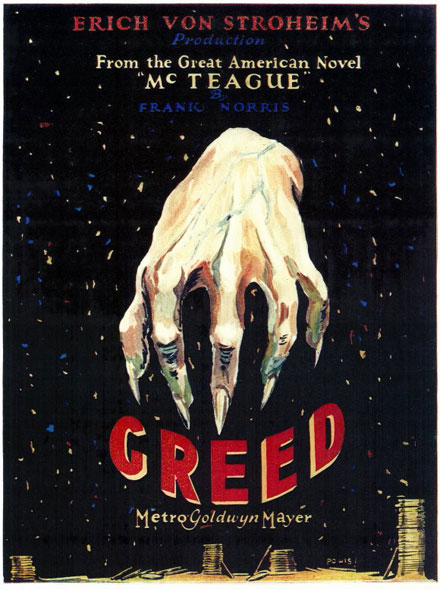