Perry’s is breaking out the wine and celebrating its first half-century. From left to right: Dwight Clark, Willie Brown, Herb Caen, and Huey Lewis in this vintage photo. Photo: courtesy Perry’s Union Street
by Julie Mitchell

Like any city, San Francisco is full of landmarks and traditions. The Golden Gate Bridge, Coit Tower, the Transamerica Pyramid, and even newcomer Salesforce Tower, are all icons that residents and tourists alike associate with our city. Even the famous fog, love it or hate it, has its own moniker: Karl the Fog. And the city has always been full of notable personalities, from politicians like Willie Brown and Nancy Pelosi to columnists like Herb Caen and sports greats like Joe Montana.

But, like any city, times change, and people and landmarks move on. Just this year Jardinière, a San Francisco fine-dining destination, shut its doors, and beloved columnist Leah Garchick gave up her column in the San Francisco Chronicle. One San Francisco institution, though is not only still here, but Perry’s on Union Street will celebrate its 50th anniversary in August with a five-day celebration featuring celebrity and guest bartenders who will serve classic cocktails. And Perry Butler, 76, still runs the show.

WHERE EVERYBODY KNOWS YOUR NAME

Butler opened Perry’s in 1969, and while there have been some updates, this classic bar and restaurant still sports its original blue-and-white checkered tablecloths, wood-paneled walls, hexagonal-tiled floors, and a classic American menu along with an inviting atmosphere that made it an instant neighborhood hangout. The atmosphere at Perry’s reminds me of the fictional bar on the television show “Cheers,” where “everybody knows your name.” Butler says, “It’s a lot like that, actually. We have lots of regulars, and often when one of them comes into the bar, the bartender will have already mixed his or her cocktail by the time they sit down.” The walls at Perry’s are covered by a mix of celebrity photos, original artwork, and other memorabilia. “This is my personal art collection,” says Butler.

After growing up in Waccabuc, N.Y., Butler followed in his father’s footsteps and attended Dartmouth University as a sociology major. When he first visited San Francisco the summer before his senior year, he fell in love with the city and realized he wanted to live here. After a short career in advertising with J. Walter Thompson in New York, Butler and his now ex-wife had a very specific intention: to open a bar and bistro in San Francisco much like the one he frequented on New York’s upper east side: Martell’s. Butler bought an old, formerly residential property on Union Street and flew with an architect to Marcell’s to show him exactly the look and feel he wanted Perry’s to have. The building was gutted, and new plumbing went in underneath a concrete slab — something that caused issues as the structure aged. “We’ve had to jackhammer through the tile floor to fix the plumbing several times,” says Butler. “At that time, in 1969, we spent $200,000 on the building, an unheard-of cost today,” he adds. 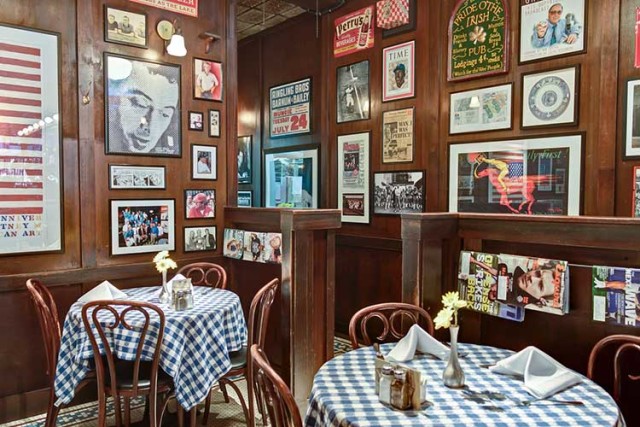 The walls in Perry’s are lined with memories. Photo: COURTESY PERRY’s Union Street

STORYTELLERS AT AND BEHIND THE BAR

When Perry was in New York, the owner of Martell’s told him he needed to track down the bar’s former bartender, Michael McCourt. At the time McCourt was tending bar in a spot called Chez Jay in Los Angeles. Butler convinced him to join the Perry’s team. McCourt, brother of Pulitzer Prize-winning author Frank McCourt, was a fantastic yarn spinner, setting the tone for Perry’s as a legitimate, welcoming place. Michael McCourt, along with Dubliner Seamus Coyle who joined him in pouring drinks and telling stories, entertained patrons and drew the likes of wordsmiths like Herb Caen, legendary San Francisco Chronicle columnist, and Armistead Maupin, author of the series of novels Tales of the City. One of the central characters in the Maupin series, Brian, was a waiter at Perry’s. Notable San Franciscans who have and still do frequent Perry’s include former mayor Willie Brown, Senator Dianne Feinstein, football greats Joe Montana and the late Dwight Clark, and musician Huey Lewis. Butler has welcomed John Travolta, Clint Eastwood, Jimmy Buffet, Robert DeNiro, Wilt Chamberlain, and others over the years.

COMFORT FOOD TO COUNT ON

Along with traditional cocktails, wine, and beer, Perry’s menu has always featured standard American food first created by chef Van Kilgore, who sought to serve high-quality food with consistency being the most important thing. “When people come to Perry’s for a meal,” says Butler, “they know exactly what they’re getting; nothing will be off.” Comfort fare at Perry’s includes a traditional Cobb salad, its renowned hamburger, French onion soup, steaks, and at brunch, a variety of classic egg dishes with eggs Benedict a longtime favorite.

When asked about Perry’s enduring popularity, Butler immediately credits the staff who have worked at the restaurant throughout his tenure. “Much of my success,” says Butler, “I owe to the remarkable group of people who have worked here. They have embraced who and what we’re all about. The business is made of many moving parts, 90 percent of it people.” Butler is thrilled that three of his five children are actively involved in the business. Aldy Butler and Margie Butler share the day-to-day oversight of Perry’s on Union Street, as well as sister restaurants Perry’s on the Embarcadero, which opened in 2008,  and Perry’s in Larkspur, which opened in 2015. Perry’s in Santa Rosa is set to open in early 2020. Hannah Butler is the bar manager at Perry’s in Larkspur and collaborates with Aldy on the cocktail menu and the wine list selections for all three restaurants.

Butler is as adamant about giving back to the community as he is about being part of it. “Every time Perry’s has celebrated a major anniversary like this one, all the proceeds from the events go to support the Make-a-Wish Foundation,” he says. “And we host an annual golf tournament each year at Harding Park with Make-a-Wish as its beneficiary.”

Festivities for Perry’s 50th anniversary will begin on Wednesday night, Aug. 14 and continue through the 18th, culminating in a block party from 11 a.m. to 5 p.m. on Union Street between Buchannan and Laguna Streets with live bands, Perry’s fare, cocktails, wine, and beer. (See Tablehopper on page 8 for details.)

San Francisco may be changing in myriad ways, but Perry’s on Union Street is very much a constant.