Pop-ups are literally popping up all over the city. These temporary establishments are a great way for retailers, chefs, and other entrepreneurs to test new concepts and gauge customer appeal. So it’s not a surprise that award-winning San Francisco chef Michael Mina and his chef partner, Adam Sobel, have opened a pop-up in Cow Hollow. Located on Greenwich Street near Fillmore in the former Café Claude space, the Mina Test Kitchen is the first pop-up for Mina Group, Mina’s restaurant management company. The first pop-up, a full-service restaurant called Middle’terranea, is inspired by the Middle Eastern and Mediterranean roots of both chefs; Mina was born in Egypt, and Sobel has roots on both sides of the Mediterranean. The chefs’ goal is to combine the flavors of Israel, Turkey, Egypt, and Lebanon in a family-style, California farm-to-table approach in a warm, inviting space.

According to Mina, who was very much in attendance when I dined at Middle’terranea, the test kitchen concept will allow the chefs to experiment with different dishes while encouraging feedback from the community and neighbors. “This menu is set for now,” he said tableside. “But that doesn’t mean we won’t tweak it a bit after hearing what patrons have to say.”

Being a pop-up, Middle’terranea is a bit different from other restaurants. For one, it’s only open for dinner Wednesday through Saturday nights, and rather than making reservations, guests are asked to purchase tickets. The menu — which includes a laffa (flatbread), salad, fish in aromatic broth, char-grilled or roasted meat, vegetables, and dessert — is set at $45 per person excluding tax, gratuity, and beverages. Diner alert: only one main course, the chicken, is included; the fish course is an additional $14, and if you add the char-grilled meat entrée, the brisket, it’s another $10. Also, when asked if we wanted still or sparkling water, we asked for still, assuming we’d get good old Hetch Hetchy’s best. Instead we were brought a large bottle of Fiji water for which we were charged $7. Good for the drought perhaps but not the environment.

But both the food and service are outstanding. The moment we were seated, the waiter (one of a bevy of pleasant staff who served us throughout the evening) brought us “the greet,” a sort of mini popsicle made from frozen limonana, lemonade made with fresh mint along with white peach, sea salt and basil; very refreshing. The next course, laffa, was served with za’atar-cured salmon and strained Greek yogurt, pickled beet, and fried zucchini; it was one of the best items on the menu.

House-made creamy hummus came next, augmented by roasted garlic, dried cherries, and fresh marjoram. (Note: the hummus incorporates both fried cauliflower and crispy chicken skins and flatbread for dipping. If you are vegan or gluten free, make sure to tell your server at the beginning of the meal and accommodations can be made.)

The main course is a harissa-marinated roasted chicken; good but not outstanding. The charred Yemenite brisket ($10 extra) was tasty if a bit tough. The fish ($14 extra) was a red snapper served with lentils, chickpeas, basmati and toasted vermicelli, and saffron tomato broth. Probably even tastier than the mains were the three accompanying vegetable dishes, with two standouts: the Moroccan street corn with chermoula yogurt and feta, and the roasted baby eggplant with slow-cooked cherry tomatoes and spices.

Dessert was a toasted sesame-mango tart with frozen Greek yogurt, preserved lime, and cardamom honey; a light way to end the meal. There is a well-crafted wine, beer, and cocktail menu, and beverage pairing is $39 per person excluding tax and gratuity.

Pop in and try this pop-up before it morphs into a completely new concept after October. 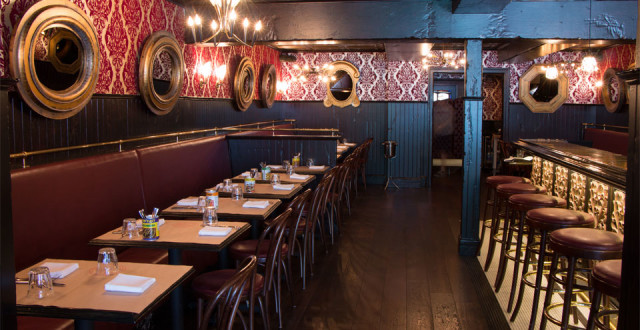