The best of Spain 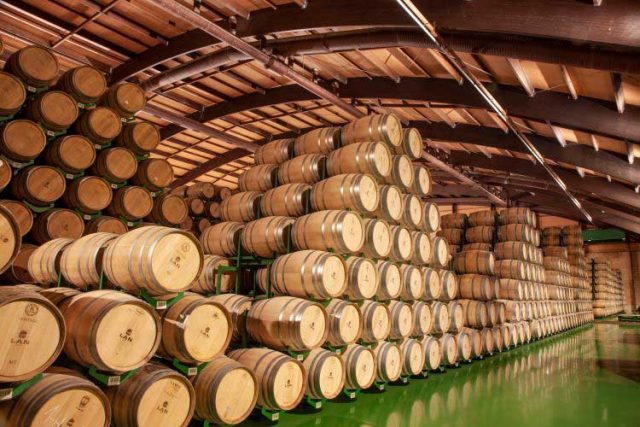 Part 1 of a multipart series on exploring Spain

Recently my husband and I had the chance to travel to Spain and spend a month tasting and experiencing the best of what the country has to offer. Parts one and two of the “Best of Spain” stories explore some of the many wines and spirits, while the remaining installments highlight places of interest from museums and fountains to churches and palaces.

We started our tour of several bodegas in La Rioja region in the town of Logroño, often considered Rioja’s capital. Rioja, known for its red wines, is spread out over 75 miles along the Ebro River in the north central part of Spain. The popular subregions are Rioja Oriental (some prefer the original designation of Rioja Baja), Rioja Alta, and Rioja Alavesa.

We made an appointment at Arizcuren, a true garage winery in the heart of Logroño; it is designed so that all of the wine production, bottling, labeling, aging, and so forth, happens in the garage. The grapes are grown in Quel, a small village about 45 minutes southeast of Logroño. There, architect-winemaker-owner Javier Arizcuren farms his family’s decades-old vineyards organically and sustainably. The 18th-century bodega is protected by the Yerga Mountains making its climate warmer and more Mediterranean. The focus is on small batch artisanal wines that are terroir-driven from the sandy and clay soils. Javier is on a mission to restore the traditions of the region and elevate the quality of the wines. His wines are generally aged in clay amphoras, cement tanks, and some French oak. Arizcuren is a member of Bodegas Familiares de Rioja, a group of 80 wineries that are family run.

Favorite wines we tasted include the 2020 Monte Gatún, a balanced blend of Garnacha, Tempranillo, and Mazuelo and the aromatic dark fruit of the 2018 Solomazuelo. Arizcuren also makes a Solomazuelo aged in clay amphora. Another standout is the 2019 Sologarnacha. The 2019 Barranco del Prado is blended of mostly Garnacha from vines that are 140 years old grown on the slopes of the Yerga Mountains at about 2,600 feet. The 2018 Valdetrillo is a blend of Garnacha and Malvasia from single plots and aged in oak barrels. It used to be that in the Rioja, Tempranillo was the grape to grow, but now, the grapes that were grown in this area historically are being revived by farmers like Arizcuren.

While sipping wine at Arizcuren, food pairings included traditional Spanish cured and aged hams and sausages, dairy fresh cheese and picos (mini breadsticks made exclusively from their organic olive oil). (Arizcuren wines can be found in San Francisco at The Press Club and online at thesourceimports.com.)

Next up was Bodegas LAN, a 20-minute drive southwest of Logroño to the town of Fuenmayor in Rioja Alta. The name LAN represents the initials of the three provinces that make up the Rioja appellation, including La Rioja (formerly called Logroño), Alava, and Navarra.

The heart of the LAN brand rests in their Viña Lanciano estate. The vineyard comprises just under 180 acres and sits along a bend in the Ebro. Founded in the early 1970s, Bodega LAN does source grapes (where they manage the farming) in addition to growing their own. The soil at Viña Lanciano is clay mixed with stones from the river. The area is protected from the wind by the Sierra de Cantabria mountain range. LAN focuses on sustainable farming and biodiversity, which reduces their environmental impact and the need for water, and allows them to farm without chemicals. They also are able to maintain the integrity of the soil by performing many of the vineyard practices manually. The terroir drives LAN wines.

We toured and tasted in the modern LAN winery and production facility, separate from Viña Lanciano. The barrel room here is not to be missed. Find thousands of bottles arranged with precision to allow for maximum ventilation, ease of movement, and efficient use of a huge space.

Reserve online ahead of time and enjoy three LAN wines and appetizers (typical Spanish chorizo and sausage, cheeses, and picos) in their light-filled tasting room. The open design includes a living room area with stylish sofas and a fireplace or high-top tables and counter seating. The three wines usually poured for visitors include LAN Crianza (mostly Tempranillo with a small amount of Mazuelo); LAN D-12 (100 percent Tempranillo named for the stainless steel tank in which the wine is held); and Viña Lanciano, the single vineyard wine that is mainly Tempranillo with small amounts of  Graciano and Mazuelo. (More labels from Bodegas LAN are available at in San Francisco, Whole Foods, PlumpJack, Rainbow Grocery, and Real Food.)

Viñedos del Contino is located in Laserna, about 20 minutes northwest from Logroño. The vineyard estate sits just east of the Ebro River and is part of the area of Rioja Alavesa and Basque Country. Viñedos del Contino is one winery in the CVNE (Compañía Vinícola del Norte de España/Northern Spanish Wine Company) family, which is one of the largest vineyard owners in Spain. Founded in 1973, the winery still uses the 200-year-old manor house while aging their wines in the 16th-century caves. It was the first single vineyard in Rioja.

The 153 acres at Viñedos del Contino are divided into plots so that the terroir drives the farming and wine production of each area individually. The grapes from the vineyards located close to the winery are harvested at the perfect time and brought to the facility with minimal disruption. CVNE philosophy is to plant more vines and decrease the yield to improve quality. A Mediterranean climate prevails throughout the Ebro Valley.

We booked online (choose from a variety of options) for our tour and tasting and enjoyed typical Spanish hors d’oeuvres as we sampled the wine. Favorites include these two 2019s: The Blanco, made from Garnacha Blanca and Viura (also called Macabeo) grapes, and the Garnacha, made from 100 percent Garnacha. We also tasted the 2017 Reserva, made from predominantly Tempranillo, with some Graciano and a bit of Mazuelo and Garnacha in the blend. Last up was the 2016 Gran Reserva made from a similar blend of Tempranillo, Garnacha, Mazuelo, and Graciano. These grapes (as do the ones for the Reserva) come from smaller plots on the estate where the Tempranillo is grown in stony soil close to the Ebro, with higher humidity. (Find CVNE wines in San Francisco at K&L Wine Merchants, some local restaurants including Bellota, Destapas, and Linden and Laguna, and online at wine.com.)

Patty Burness can be found on Twitter (@pattygb), Instagram (pburness), and reached by e-mail at [email protected].