The best of Spain

Part 3 of a multipart series on exploring Spain 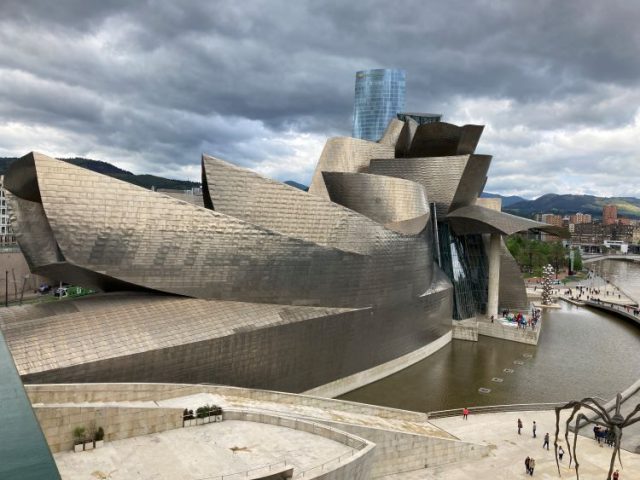 Recently my husband and I had the chance to travel to Spain and spend a month tasting and experiencing the best of what the country has to offer. Part three of the “Best of Spain” stories travels to Barcelona and Bilbao and highlights places of interest from museums to churches, palaces, markets, and tapas bars.

Barcelona is a vibrant city rich with architectural treasures and world-class museums. With a population of over one-and-one-half million people, the sprawling city hugs the Mediterranean and offers stunning views. Like San Francisco, Barcelona is very walkable — it’s easy to explore all that the city has to offer. Here’s some of what we found:

After a vigorous walk up Montjuic, not only do you get a knockout view of Barcelona, but you reach the Fundació Joan Miró as well. The contemporary and expansive building houses the largest collection of Miró’s exquisite abstract surrealist pieces alongside modern artists from the 20th and 21st centuries. You will be mesmerized by the grandeur of the museum and Miró’s use of colors, shapes, media, and messages. Opened in 1975, it has become an important source of educational programming and exhibitions.

Before you leave photogenic Montjuic, be sure to hop on the Telefèric Montjuic to take a cable car to the top and see the view including Montjuic Castle, a former fortress. This area was also home to the 1992 Summer Olympics.

As you’re walking down La Rambla in the heart of Barcelona, stop and admire the Miró Mosaic in the Plaza de la Boqueriá (many don’t realize what they’re walking on and keep going). Miró designed it in 1968 as part of three pieces that were commissioned to help welcome visitors to Barcelona. The mosaic opened in 1976 and was intended to greet those coming to the city by boat.

Antoni Gaudí, recognized as an architectural leader in the Art Nouveau movement, is a renowned figure in Barcelona. His prized works are located throughout the city.  We started at the Güell Palace, Gaudí’s first commissioned work at age 34. The home was built for the Güells, a wealthy Barcelonian family, and its evolution from 1886–1890 allowed Gaudí to express his creativity and imagination. In 1984, it was designated a UNESCO World Heritage site.

The palace embodies the design features integrated throughout future projects including chimneys (sculptures in their own right) and the use of traditional materials in all of the extraordinary (yet functional) palace rooms including glass (and ever-changing rays of light), stone, an abundance of wood, wrought iron, and pottery. These resources are combined with an intricacy of design and imagination that are stunning.

La Pedrera (also known as Casa Milà) is another Gaudí completed in 1906. It was originally conceptualized for a prominent family with their home on the first floor, rental apartments above, and commercial space on the ground floor. The exterior design is especially captivating with its colors, shapes, and use of wrought iron; don’t forget the chimneys on the roof! In 1984, La Pedrera, too, was declared a UNESCO World Heritage Site, and since its opening to the public in 1996, it hosts tourists, cultural events, foundation offices, and still remains the home to several residents. You will be awestruck by La Sagrada Familia. In 1883, Gaudí took over the design of this Basilica; yet to this day, it remains unfinished (though work is still being done according to his original design). When Gaudí died in 1926, the Bell Tower was the only completed part of the structure. You can’t help but be enthralled with the sheer size, the stained-glass windows (with the light filtering through), massive stone arches, and all of the other design elements so prominent in Gaudí’s works.

Down several winding streets, discover the Museu Picasso, a set of five connected palaces that are home to close to 4,250 works of Pablo Picasso in its permanent collection. They celebrate this prolific artist in his formative years as well as his deep connection to Barcelona. His first work was donated in 1919 and laid the foundation for the museum today. The museum’s stone design with low ceilings, archways, small spaces, and uncluttered galleries encourage a more intimate connection with each of Picasso’s works.

At the museum, get a taste of the some of the various art forms Picasso used – painting, sculpting, and ceramics. Picasso was one of the founders of the Cubist movement and ultimately became one of the most important artists of the 20th century.

We also spent many hours in local markets and tapas bars; it’s impossible to choose favorites.

Visit Barcelona is a convenient site to plan your visit, buy tickets and learn about the city.

Bilbao is sometimes referred to as the gateway to the Basque country. Beginning as a vital hub of international trade in the 15th and 16th centuries, Bilbao became an important economic center. Through wars and national disasters, Bilbao transformed itself to become the lively, international draw the city is today.

TheMuseo Guggenheim Bilbao dominates its location next to the Nervión River in a newer section of the city. The Frank Gehry structure is larger than life. As you approach from either a city street or a walkway next to the river, suddenly, the magnificent design comes into view.  It evokes the curves of a ship, the waves of the sea, and so many other swirling forms. The titanium changes color with each ray of light casting its own reflection.

The towering atrium, skylight, and glass walls invite light and color into every corner of the museum and along the curved walkways that are signature Guggenheim. The interior also features a bridgeway, tower, and column-free gallery. Rotating exhibitions enhance the various galleries; we saw “Motion: Autos, Art Architecture” with an unbelievable collection of vintage cars.

You won’t miss at Plaza Nueva, a colorful part of the local tapas culture tucked in the city’s old quarter. La Ribera is the largest covered public market in the world according to Guinness World Records and a treat for the senses.

Patty Burness can be found on Twitter (@pattygb), Instagram (pburness, and reached by e-mail at [email protected].