The horse that swam the Golden Gate

“The Horse that Swam the Golden Gate.” I love that headline. Even before my friend Jimmy Schein told me about Blackie — the horse we’re talking about here — I just knew that had to be the headline for this “Back Story.” How could I resist?

In 1938, Richard “Shorty” Roberts, proprietor of the San Francisco roadhouse Roberts-at-the-Beach out on the Great Highway, owned a fine horse named Blackie. Shorty’s roadhouse was a popular spot that attracted what in those days were called “sports” — newspaper reporters, card players, cops, racing fans, and the like. C.S. Howard, owner of the famed racer Seabiscuit, hung out there. Later racing enthusiasts like Bing Crosby could be found there soaking up the equine atmosphere along with the highballs. Going to the track and playing the horses was a way of life with this crowd. So it was that one day in September of that year that Bill Kyne, who owned the Bay Meadows racecourse down the Peninsula in San Mateo, dropped by Shorty’s place. And that’s when this “Back Story” got interesting. 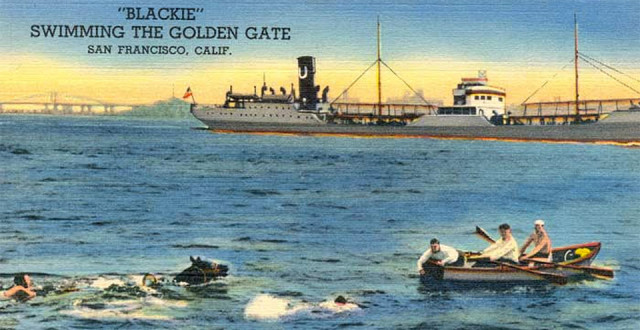 SHORTY MAKES A BET
Blackie was a sway-backed 12-year-old. We are told that originally he was a rodeo horse who later became a U.S. Army cavalry animal stabled at San Francisco’s Presidio. In the spring, he would be sent to Yosemite to serve with the park patrol. Just how Shorty acquired Blackie is lost in history. But Shorty Roberts was a dedicated horseman, and Blackie was his mount.

One day Bill Kyne and Shorty were talking about their favorite subject. Over a few pints of beer, Kyne happened to mention that horses couldn’t swim. Not so, said Shorty, and the two horse fanciers argued the point for a while. Shorty insisted that horses could indeed swim and that his horse Blackie was a fine swimmer, in fact, so fine that he could swim across the Golden Gate. One thing led to another and finally Kyne offered a wager. He offered to bet Shorty $5,000 that Blackie couldn’t do it. The wager was scaled down to a reasonable $1,000 — still a lot of money in those days. And the bet was on.

BLACKIE IN THE BAY
The two gamblers set the parameters. Blackie would attempt to swim from Lime Point in Marin County to Crissy Field in San Francisco. But word got out and the bet almost floundered. According to author Lori Ungaretti, who wrote in the Western Neighborhoods Project newsletter, the SPCA heard about the wager and convinced the Army at Lime Point, the fortified military reservation, not to allow Blackie to begin his challenging swim from there. But, not to worry. Shorty’s friend, A.P. Paladini, who operated a large wholesale seafood operation, was there to help. So on Oct. 1, 1938, the Paladini fishing trawler lowered Blackie by a sling into the San Francisco Bay, just offshore from Lime Point. And the swim was on.

A rowboat led the way with Shorty’s brother offering sugar cubes as encouragement. But Blackie needed no encouragement. And Shorty — who couldn’t swim — donned a life preserver, covered his body in protective grease and clutched Blackie’s tail for the long pull. So, undaunted by the choppy Golden Gate waters, Blackie set out to swim — to horse-paddle to be precise — all the way to San Francisco and into the history books. The only horse to ever swim the Golden Gate.

BLACKIE RETIRES
The swim took 23 minutes and 15 seconds. Blackie emerged from the water triumphant — not even breathing hard. What a winner! Shorty won his bet and Roberts-at-the-Beach celebrated with a big party. A commemorative china plate was created to mark Blackie’s accomplishment. Check with Jimmy Schein of Schein & Schein on Upper Grant Avenue. He’s got one.

Later Blackie retired to a Tiburon pasture. But he didn’t have to swim back to Marin County. He’d proved his point. He lived a long and idle life. And now a life-sized sculpture of Blackie stands in his place. Horse fanciers can pay homage at Blackie’s Pasture Park, Tiburon Boulevard, and Trestle Glen Road. There’s a short film on the Internet of Blackie’s historic swim.