Taste your way through Healdsburg

Healdsburg is hot. This artisanal area has award-winning wines, acclaimed chefs, a zeal for local products and friendly residents. And it’s an easy drive from San Francisco — just gauge the traffic correctly.

Pomo Indians inhabited Healdsburg thousands of years ago. After the Gold Rush of 1849, the town prospered and grew exponentially. And in 1872, the railroad reached Healdsburg. Farming has always been important, but what started as mostly fruit orchards has now turned to vineyards.

The town is centered around a verdant 19th century plaza and streets lined with boutiques, restaurants, tasting rooms, bookstores, and more. The valleys surrounding Healdsburg are known for the quality of the grapes. It’s fun driving in the countryside from winery to winery, but this trip my husband and I stayed in the vibrant downtown area to savor what the region has to offer and taste our way through town.

We chose the relatively new Hotel Trio, located minutes from the plaza (there’s a complimentary shuttle). The hotel takes its name from the three valleys in which it’s situated: Russian River, Alexander, and Dry Creek. It’s got a hip, high energy vibe and is TAG approved (LGBTQ-friendly accommodations).

A unique feature of the hotel is Rosé the Robot. Sounding similar to R2D2, she not only greets guests in the lobby, but delivers amenities right to your door! There’s also a lush living green wall behind the reception area, a bocce ball court, and heated pool.

The interior of the modern hotel boasts soft, soothing colors in both the spacious lobby area as well as the guest rooms. Everything is designed with sleek, clean lines, including the wine bar and outside patio. We stayed in a king suite, which has both a kitchen and living area in addition to the bedroom. (It’s an all-suite hotel.) The large bathroom has a floor-to-ceiling sliding barn door for privacy.

In the morning, we enjoyed the hotel’s complimentary breakfast before heading back to the city. In addition to eggs, sausages, fruit, yogurt, and cereal, there is a set up to make your own waffles with all of the toppings (707-433-4000, hoteltrio.com). 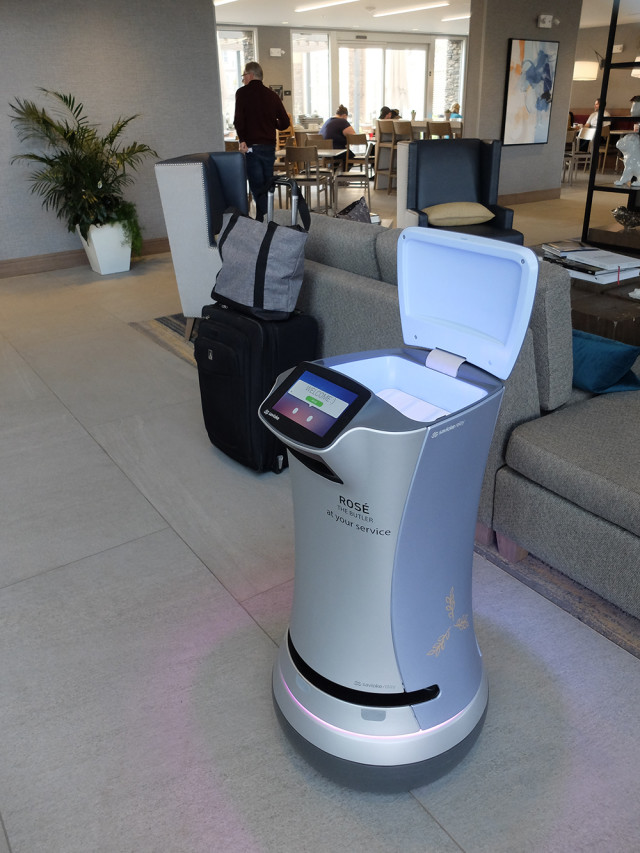 Rosé is at your service at Hotel Trio. Photo by Bo Links

TASTING YOUR WAY THROUGH HEALDSBURG

We began our tasting adventure at Hudson Street Wineries, which showcases five small-lot, local wineries. Find nothing but stand-out wines at this cooperative. Located south of the plaza, the wineries are part of the Old Roma Station, known in the 1900s as the French-American Wine Company. It’s in this warehouse district that the railroad tracks meet the Russian River.

Once spring starts, on Friday nights people are drawn to Hudson Street Wineries for the chance to hear great music while enjoying the wine (707-433-2364; hudsonstreetwineries.com).

At Seghesio Family Vineyard, we joined a small group and enjoyed the Chef’s Table — a decadent four course seasonal food menu paired with wine highlighting their Zinfandels, Italian varietals, and blends with a seasonal menu. Prior to the main event, we began in the tasting room sipping the 2017 Vermentino and listening to the history of the family and their winery.

Celebrating more than 120 years and five generations in Sonoma County, the Segeshios immigrated from Italy and soon planted their first Zinfandel in the Alexander Valley in 1895. They survived Prohibition, and today boast the hands-on involvement of three generations. (In 2011, they became part of a larger wine group.)

In their cozy Founders Room, we began the feast with a cauliflower, almond, and Manchego soup with the 2015 Venom (Sangiovese). Next up was the 2015 Maffei Zinfandel with a luscious potato gnocchi served with black truffle fondue, hazelnuts, and watercress. The 2011 Pagani Zin was paired with liberty duck and mushroom ragu with winter squash and served on roasted pepper polenta. The final course was sliced New York steak with blue cheese butter, fondant potato, and Brussels sprouts paired with the 2015 Old Vine Zin (707-433-3579; seghesio.com). 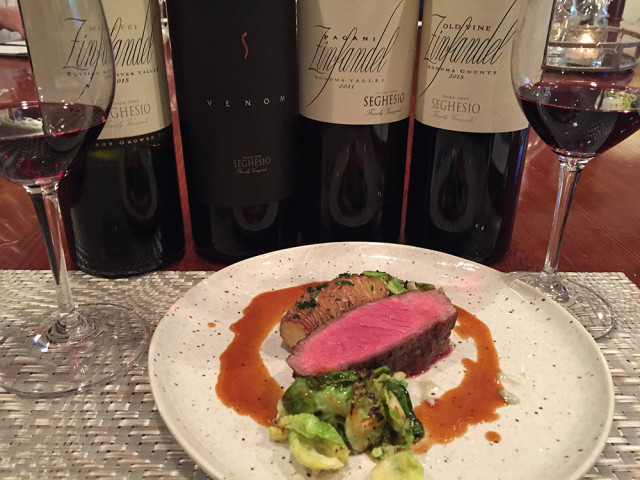 Journeyman Meat Co. was the last stop on our tasting spree. The company is named after the European tradition of traveling craftsmen who used their skills in exchange for hospitality and is the dream of Pete Seghesio. After leaving the family winery in 2011, Pete finally opened his Italian-inspired store (he even trained in Italy) — part butcher shop, salumeria, and wine tasting shop. He even is the proud owner of a state-of-the-art USDA-certified salumificio in Geyserville.

All of the ingredients, be they in the salumi, the sausages, the wine, or the beef and pork, are sourced locally. They put the spotlight on family farms in Sonoma County. We enjoyed the bounty of food and wine at the counter of this bustling destination, savoring everything from barrel-smoked, hand-cured bacon to various salumis — Chorizo, Bianco, and Il Pio dry salami, named for Pete’s father and using his original recipe. We also tried a pizza from the wood-burning oven. The tastes were paired with the family estate wines, Journeyman and San Lorenzo. Favorites include the 2016 Journeyman Pinot Noir, the 2015 Rock Garden San Lorenzo Zinfandel, and the 2014 San Lorenzo Estate Heritage Pearl (Zinfandel/Carignane/Petite Sirah/Mixed Reds).

Everything we tasted can be taken out in addition to house-made sandwiches, meatballs, and cuts of beef that are all estate-raised (707-395-6328, journeymanmeat.com). 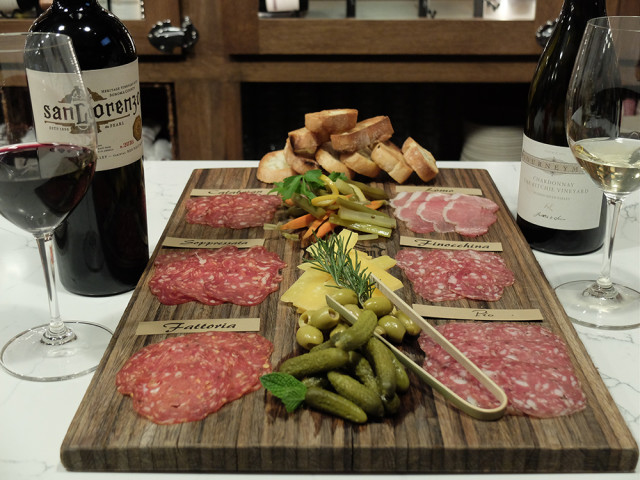 We did visit Shed, but it has since closed. Some products might still be available online (healdsburgshed.com).