The many flavors of San Francisco food tours

Most people agree that San Francisco is foodie heaven, and a great way to experience it is on a food tour. The proliferation of these excursions is an excellent opportunity to get up close and personal with popular neighborhoods, restaurants, and  bars, and to learn about favorite (and sometimes secret) spots.

Food tours come in a variety of flavors — some serve the food on the side of historical tales. Others make the food the center of attention. Recently, I explored several options:

What: Focused heavily on food, with a dash of history, the tours are concentrated in food-centric Hayes Valley, the Fillmore, and Russian Hill. Our guide was a serious foodie who knew her way around the hood. During the three-hour, seven-stop walk, we enjoyed reserved tables with specialties on the way. Each tour is slightly different, due to the number of partnerships in the area.

Where: The tour started at Patricia’s Green, a park off Hayes Street. Smitten Ice Cream, adjacent to the park, is housed in a repurposed shipping container next to an outdoor theater and exercise lot. We watched liquid nitrogen freeze each order individually.

On to the Fatted Calf and tastes of various artisan salumi, patés, and cheeses — even cured lamb bacon. They offer classes, hold a Butcher’s Happy Hour, and promote humanely raised animals. 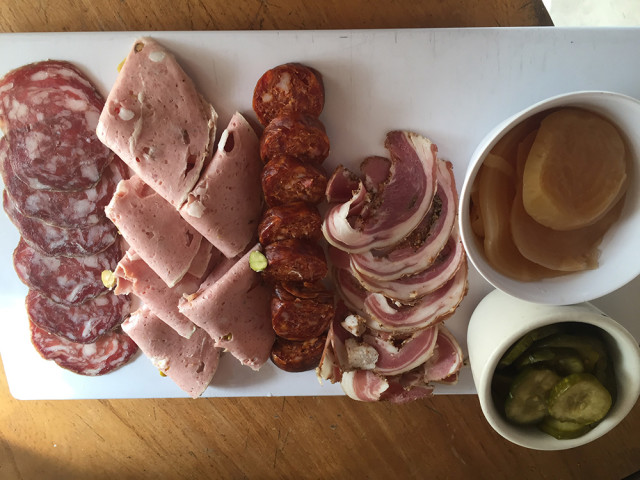 At Corridor, we sat at a high-top table and shared an assortment of hors d’oeuvres, including monkey bread followed by spicy meatballs, accompanied by our choice of wine, beer, and cocktails. This casual restaurant is open all day in the old AAA building on Van Ness Avenue. 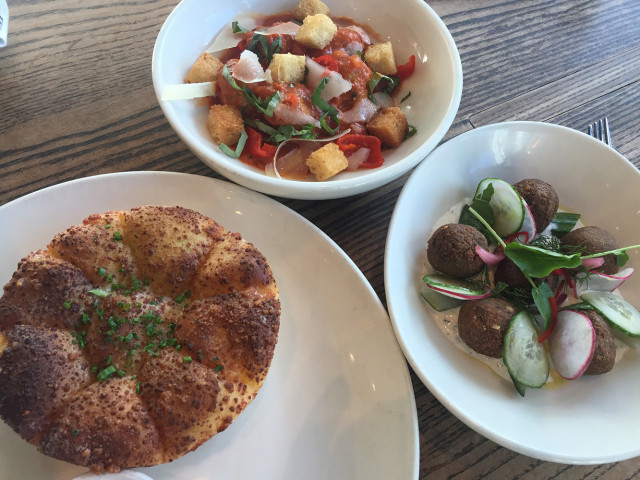 Assortment of appetizers from Corridor. Photo by Patty Burness

At a table under the trees on the backyard deck at Arlequin Café, we tasted an assortment of local cheeses, honey, candied walnuts, fruit compote — all paired with a 2015 Viano Vineyard Chardonnay.

From there we headed to DragonEats, a small Vietnamese restaurant serving big flavors. Don’t miss the garlic butter chicken Banh My on a bullet baguette.

What: This three-hour tour of North Beach and the Barbary Coast offers a unique twist — a four-course progressive meal that includes two appetizers, a main, and dessert, while you learn about the history of the area and the cuisine. All of the tables are reserved; the food is ordered in advance.

The destinations change regularly, all with a goal of good food and good stories shared by informative guides.

Where: Washington Square was the starting point with stories about the Gold Rush and the influx of Italian farmers and fishermen at the turn of the 20th century.

The first stop for an appetizer was Sotto Mare Oysteria & Fish Market, a local favorite for cioppino (hearty seafood stew). 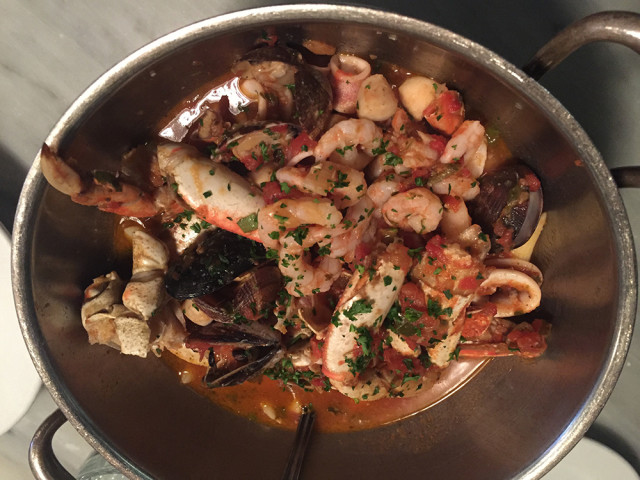 Like the Italians, the Chinese were also lured to San Francisco with the promise of gold. A vibrant community emerged adjacent to North Beach. China Live was our second stop. Created by George Chen, this multilevel venue includes a cafe, marketplace, high–end restaurant, and whiskey bar. We sat in the main floor cafe and watched chefs at various stations making dumplings, duck dishes, desserts, and cocktails. The Peking duck pocket was a delicious appetizer served in a sesame bun with kumquat glaze, paired with a Shanghai blonde ale. 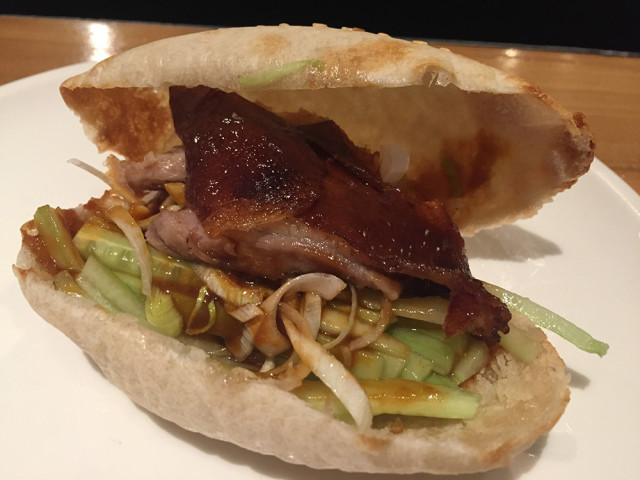 From there we walked around the Barbary Coast (similar to the S.F. Tours experience below) and for the main course, headed to Tomasso’s, a San Francisco institution. It has the West Coast’s first wood-fired brick oven (from 1935) and the walls are bedecked with hand–painted murals of Naples and the Amalfi Coast. Family owned for more than 80 years, most recipes are secret — taste the results in pizzas like the margherita and the sliced Italian pepperoni.  Swoon over the original prices: $.75 for a small pizza and $1.50 for veal scaloppini.  We paired pizza with their private label 2016 red blend (Zinfandel, Merlot, and Syrah).

The final leg brought us to Lush Gelato. Working exclusively from scratch with ingredients sourced locally, it’s the largest gelato production outside of Italy. Dessert was a scoop of salted stracciatella and Tahitian vanilla (415-355-4044, avitaltours.com).

What: This two-hour tour is a great introduction to the iconic Ferry Building and its many purveyors. I joined a corporate team-building group with our well-informed guide, who is also a private chef. The vendors are chosen each day (all tours vary slightly) and usually include nine to 10 stops per tour. We sat and tasted samples at some stops. At others, our guide pulled out goodies she had purchased earlier in the day ahead of the crowds.

Where: The Ferry Building, with its noteworthy clock tower and nonstop views, is a popular destination for locals and visitors. It is also the site of farmers’ markets throughout the week. The building opened in 1898 (before bridges were built), and was renovated after the 1989 earthquake.

Tasting started just outside where we savored a delicious apple tartlet from Frog Hollow Farm. At Prather Ranch, we had some dry-aged shoulder meat, one of many products from their humanely raised herd of cattle. You’ll be wowed with the edible creations at Recchuiti Confections (like the fleur de sel caramel with its wonderful burnt flavor).

At Delica we sat and ate a yummy chicken dumpling and spicy salad (the company is part of a Japanese deli chain). Next: Acme Bread and Cowgirl Creamery — both owned by alums of Chez Panisse. We relished the rustic bread and the luscious triple cream Mt. Tam cheese.

Of the remaining stops, OTD was the savory one — Vietnamese poached spring rolls, both shrimp and pork. It’s the fast–casual relative of the Slanted Door. 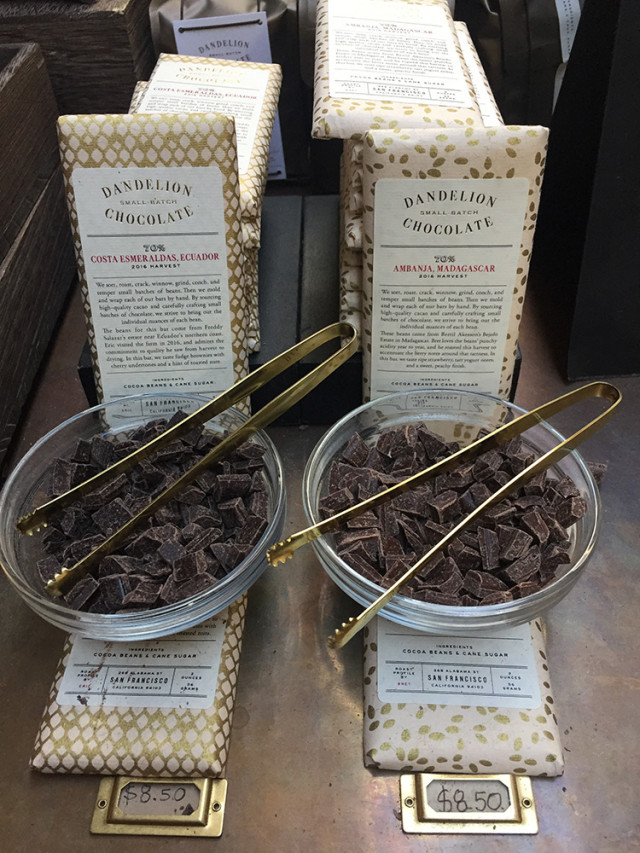 On this tour, you’ll satisfy cravings and explore one of the most iconic foodie havens in the Bay Area (415-806-5970, edibleexcursions.net).

What:  Created by a native San Franciscan with strong family roots, this excursion offers glimpses of downtown San Francisco, Barbary Coast-Jackson Square, North Beach, and Chinatown. More history with a side of food, the four-hour tour offers up rich stories and a focus on the city’s culture, including hidden gems and local specialties.  (The company also offers a local beer tour.)

Where: The walk starts in Redwood Park at the base of the Transamerica Pyramid. We learned about the 1849 Gold Rush; why street names are imprinted on the sidewalks (to help firefighters); as well as the many POPOS (private-owned public open spaces) around the city.

We stopped in Jackson Square for a quick panini at Giovanni’s Cafe then along to Gold Street, where we heard about brothels and bars that flourished during the 1860s, as well as the underground tunnel where young men were “Shanghaied” to provide labor on seagoing vessels.

Walking through North Beach, we learned about Italian history and the Beat Generation. We passed the Saloon (the oldest bar in San Francisco, saved by firefighters after the 1906 earthquake because hookers worked upstairs) and Caffe Trieste (oldest espresso coffee house on the West Coast).

From there, we savored fudge at Z. Cioccolato and cookies from Stella Bakery on our way to Molinari Delicatessen on Columbus Avenue. We grabbed tables outside and enjoyed arancini, olives, caprese salad, and a deli sandwich.

Chinatown was our final destination. We listened to stories of its settlement as we wound down alleys and through bustling markets. We ducked into a fortune cookie factory and across Stockton Street to Delicious Dim Sum on Jackson Street for potstickers, dumplings, and pork buns.

The tour concluded in Portsmouth Square. Historical markers there indicate the first public school in the state, the raising of the American flag in 1846, and the eastern terminal of the Clay Street Hill Railroad. Today, the square is a gathering spot for young and old with chess tables, tai chi, and a playground (415-797-7368, sfnativetours.com).