The view of Estoril and Cascais, caught at night from the Hotel Palacio (photo: Small Luxury Hotels of the World)
by Patty Burness

Just to the west of Lisbon, and an easy train or car ride away, Portugal’s Riviera unfolds — white sandy beaches, stunning vistas, bars and restaurants sprawling onto the Promenade along the water’s edge, and fun-loving locals and tourists making the scene. Discover Estoril and Cascais, two neighboring beach towns on what’s also known as the Estoril Coast. They capture the spirit of the sea and are excellent spots to come back to after day trips.

Because of their strategic location, the history is intertwined with the famous Portuguese discoveries of the world. Once part of the defense of Portugal’s coast, then fishing villages, they are now a popular vacation destination.

My husband and I stayed at the Hotel Palácio Estoril, a Small Luxury Hotel built in the 1930s. During World War II, this elegant property was a magnet for royalty and the headquarters for spies. It attracted Europe’s A-listers because of its proximity to the grand Estoril Casino, one of the largest in Europe. It was even used in James Bond thrillers.

The large white building and magnificent gardens set the stage for the luxury interior. The lobby and the bar are richly appointed and offer beautiful vistas of the pool and beyond. Choose from rooms with views of the beaches or pool, and some with patios and pool and garden terraces. Each is fully equipped for maximum comfort and connectivity. Personalized service is nonstop. Don’t miss the wonderful photo gallery that honors the kings and queens, athletes, celebrities, and other notables who stayed here.

Each morning, indulge in a lavish buffet with homemade pastries and other specialty Portuguese sweets, made-to-order omelets, smoked meats, and an espresso machine that makes your favorite coffee (palacioestorilhotel.com). 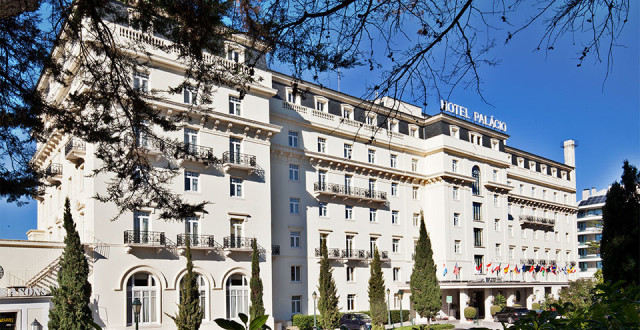 The streets of Cascais and Estoril are lined with brightly colored buildings and white-washed façades — all with terra cotta roofs. They’re home to quaint shops, trendy boutiques, touristy stores, and restaurants and bars. The same black and white mosaic-patterned streets in Lisbon flourish here. Everything is in walking distance of the beaches as well as the Promenade that connects Cascais and Estoril.

Beaches: The three beaches in Cascais all have knock-out views but are narrow and tend to fill up quickly. The Praia de Tamariz in Estoril offers more space. Better beaches can be found farther west and north along the coastline like Praia Guincho — where you can sip wine and savor fresh seafood at one of the trendy restaurants, and depending on the time of year, watch the whales migrate. At the Cabo da Roca Lighthouse, you’ll be standing on the western-most spot in Europe. The spectacular view is reminiscent of California’s Highway One. All along the coast, there are places to rent kayaks, stand-up paddle boards, boats, and more. 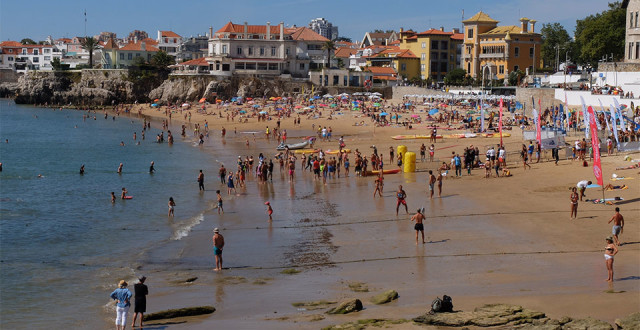 Sintra: This historic charming town is a quick drive from the coast and is designated a UNESCO World Heritage Site. The Sintra Mountains and Nature Park can be explored on foot, local bus, horseback — even by carriage. Be sure to pick up detailed maps of the area and choose which of the magnificent castles, palaces, estates, and other areas to tour (parquesdesintra.pt/en).

The three most-visited sites include:

First, the Moors Castle, built in the 9th century to guard Sintra, was painstakingly restored in the 19th. Explore the ancient ruin and its stone walls and turrets with high points to take in the splendor of the surroundings.

Second, and set on another peak, the Pena Palace and Park is probably best known as a stunning example of 19th century Portuguese Romanticism. It’s also one of the Seven Wonders of Portugal. Except for the original chapel, the palace was destroyed during the Great Lisbon Earthquake in 1755 and finally rebuilt by 1854. Used by royal families until 1889, it was purchased by Portugal and became a national monument. The original yellow and red façades were repainted and restored to their brilliant hues in the late 1900s. The architectural design, the colors and its view of the countryside are astounding. 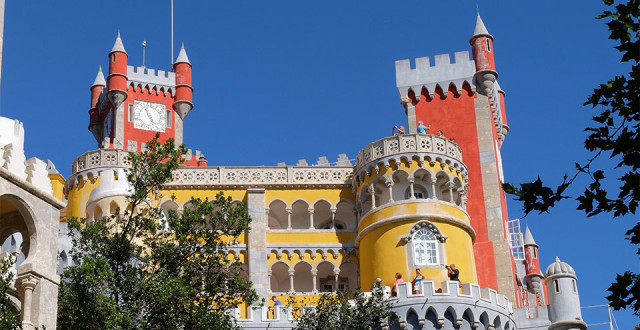 Third, in the middle of Sintra, the National Palace is a testament to the Gothic, Manueline, and Moorish styles of design. Much of the palace that remains today dates from 1415, replete with an elaborate interior, expansive courtyards, and decorative tile work. It was a favorite retreat for kings, especially in the 1800s. In 1910 it became a national monument and in 1940, it was completely restored.

Wineries flourish in the Lisboa region of Portugal near the Atlantic. On one side of the mountains, the wind comes in to play, and on the other, vines are more protected in valleys, but all feel the influence of the salt air. At Vale da Capucha, a family owned and run winery started by the great grandfather, it’s now the fourth generation that grows the native Portuguese grapes and makes the wine organically. The vineyards are planted on limestone with clay and produce fresh, exciting wines driven by the terroir. Call ahead for an appointment to sample wines in their intimate tasting room, visit the cellars, and spend time with the passionate Marquez family. They are mainly producers of whites; try these 2015s: Arinto, Branco (92 percent Fernão Pires, 8 percent Arinto) and Gouveio. They also produce a Fossil label: Taste the 2015 blend of 45-percent Arinto, 45-percent Fernão Pires, and 10-percent Gouveio (facebook.com/valedacapucha).

Quinta do Sanguinhal is another established family winery nearby, created in the early 19th century. The landscaped grounds and extensive space make it an event destination. Call for an appointment and tour the property, including the area’s oldest distilleries and original screw presses, hear the history of the Pereira da Fonseca family, and taste their wines paired with several food options. One of several labels, don’t miss the 2015 Cerejeiras, a blend of 60-percent Castelão, 30-percent Aragonez, 10-percent Touriga Nacional, and the Quinta de São Francisco with 60-percent Castelão, 20-percent Aragonez, 20-percent Touriga Nacional (vinhos-sanguinhal.pt/index.php/en#).

Golf, fitness, spa, pool: At the Palácio Hotel, the shuttle will take you to golf at the top of a hill with panoramic views. You can lounge poolside in a cabana, and try the health and fitness center and spa, with sauna, steam hydrotherapy, and other relaxing treatments.

For a meal with the ultimate view, have lunch at the Restaurant in the Albatroz Hotel, a former 19th century mansion. The restaurant in this luxury property is always packed, so call ahead. The terrace (outside or inside, depending on the weather) is the place to be for a front-row seat for the nonstop scene in Cascais — on the beach and the bay. A leisurely lunch was on our menu as we started with the 2012 Murganheira Reserva Brut, then ate our way through the succulent Albatroz octopus with red pepper sauce and the traditional Portuguese seafood stew, caldeirada de peixes e maricos, loaded with clams, shrimp, and the fish of the day. Dessert was luscious ricotta with lime, honey, and pumpkin ice cream paired with a Blackett 20 year (thealbatrozcollection.com/albatrozhotel/restaurant). 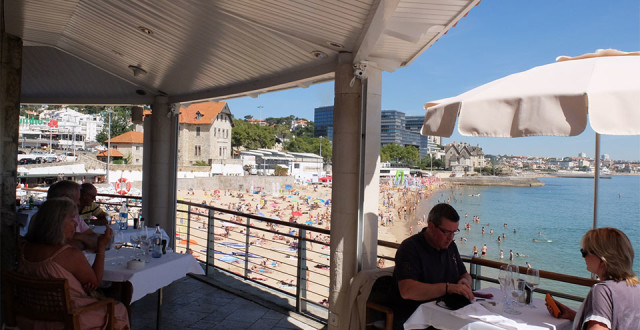 The Cascais scene from the patio at the Albatroz Hotel (photo: Bo Links)

Beachside Restaurants: It’s all about the seafood (and the location), and you’ll find some of the best at these hot spots: CasCas — almost right under the massive windows of the Albatroz Hotel, this place is nonstop with locals and tourists alike (restaurantecascas.com). Bolina sits on an Estoril beach with knock-out views (restbolina.com). Furnas do Guincho is farther up the coast with spacious terraces and beautiful Atlantic vistas. (furnasdoguincho.pt). 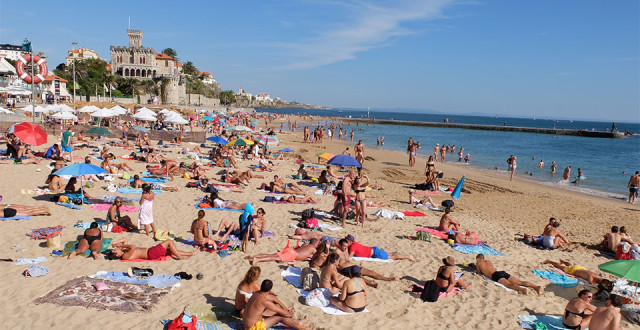