The Serengeti in our backyard

The nearest thing to the perfect African safari is right in the San Francisco Bay Area, yet many don’t know it exists. Safari West is one of the most authentic wildlife experiences outside of Africa. The 400-acre preserve is just an hour north of San Francisco, in the wine country between Santa Rosa and Calistoga.

This area was ravaged during the October 2017 fires; yet miraculously, all of the animals were saved. Opened to the public in 1993, Safari West boasts more than 1,000 exotic mammals and birds representing animals from every corner of the African continent. It’s a rare opportunity to experience some of the world’s most incredible animals as you travel through their natural habitat. My husband and I had an unforgettable adventure when we visited.

As you pull into Safari West, you are immediately transported to the Serengeti. Giraffes extend their long necks hoping for a friendly pet and safari jeeps are lined up ready to take you deep inside a Northern California savannah. 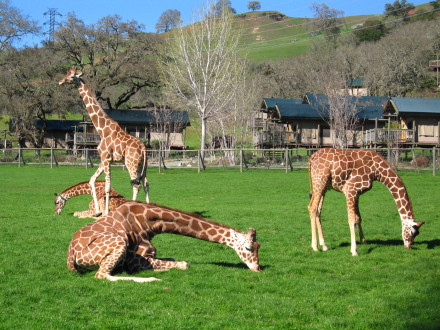 Not content for simply a day in this magic place, we decided to spend the night in one of their luxury tents imported directly from Africa. It was just as we imagined: canvas flaps, upscale décor, and a comfortable deck that opened to a truly unbelievable panorama: a golden sunset as giraffes, ostriches, and others prepared for dusk. The furniture in the tent camp is custom-made, as is most of the furniture in the dining room. It’s all produced in a sawmill on the property. 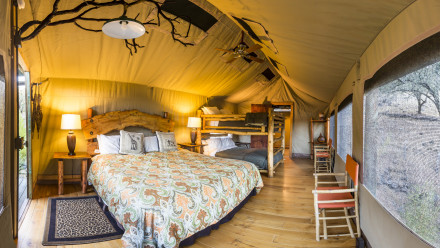 Stay in one of the plush African tents. Image courtesy of Safari West

Enjoy sleeping amid the squawking, chirping, howling, and other noises of the African plain. (Note: due to the fires, the tents will reopen March 1st for overnight stays; book online.)

Safari West is dedicated to breeding some endangered bird species, conducting research, and educating all those who are interested in wildlife preservation and conservation. The most exciting aspect of the facility is bringing the public to share in an extraordinary environment where they can learn about the exotic animals — from Addax Antelopes to Chapman’s Zebra — who call Safari West home. 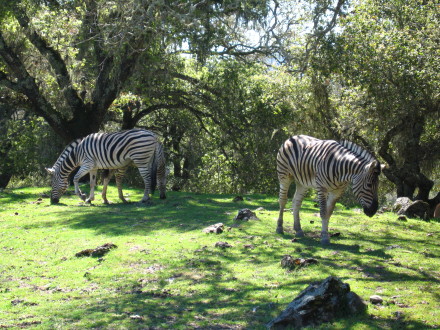 A guided adventure begins as you climb aboard a real open-air safari jeep — actually a retrofitted old power wagon that had been used in the Korean War. No matter, it looks like the real thing. The vehicles accommodate people up top (in seats on the roof) for ideal viewing. During the 2-hour journey over dirt roads, uneven terrain, and beautifully landscaped areas, watsui cattle posed for pictures, bongos (antelopes from the Congo) and gazelles wandered by, and a group of zebras let us get up close and personal. Don’t forget the ostrich and Blue Wildebeests. There are literally animals most everywhere you turn, but you do have to look closely because they are well camouflaged in their native surroundings. All the while, our knowledgeable tour guide recounted the personal histories of the animals and special tales about the preserve itself. 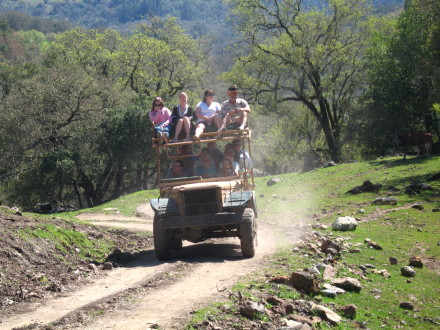 Off on Safari! Photo: Bo Links

After the safari ride, our guide led us on a walking tour through an aviary filled with beautiful pheasants, black neck swans, African spoonbills, and magnificent parrots. Ring-tailed lemurs played on their own special island.

And then it was time for the real insider’s tour, which is called Take a Wild Walk Behind the Scenes. Personally escorted into the giraffe barn by one of the naturalists, we were greeted by swooping necks from above, just in time to deliver treats to the giraffes. Their long dark tongues swooped down around our hands so as to slide carrots into their mouths. On to the cheetahs who purred as they strode up and down on a bed of straw.

Through its efforts to preserve and conserve exotic animals from Africa, Safari West not only welcomes the public, but also students and teachers from local schools and universities. Educators from all over the Bay Area conduct field trips in this unparalleled setting. 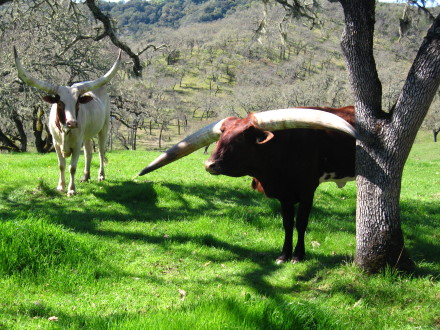 But don’t be mistaken. This adventure is not limited to families with children. It’s for everyone. We met generations celebrating special occasions, girlfriends as well as mothers and daughters bonding, and couples on romantic getaways. If you want to see life in the wild, head straight for Safari West. And as one of the naturalists aptly observed: for this journey, you don’t need vaccines and a passport. Find out how to adopt an animal, volunteer, or get involved with the Safari West Foundation.

Before settling in for the night, it was time for a family-style safari barbeque inspired by a South African braai (a social tradition of barbecuing and eating). We followed the scent to the open fire pit where sweet smoke was cooking chicken and ribs. Together with a buffet piled high with green and pasta salads, the chef’s secret recipe Safari beans and yummy bread pudding for dessert, we had our fill. The menu changes frequently and always offers plenty to eat.

The next morning, as the fog lifted, we walked down to the Savannah Café (right next to the outdoor dining area) for a homemade continental breakfast. We snuck a peak in the Elephant Room, a private area adjacent to where we were eating. Grandly hanging on the wall is a massive carving of a herd of elephants made out of Rhodesian teak salvaged from railroad tracks. It made for a perfect pairing with the brightly colored hand-painted murals in the café depicting classic safari scenes.