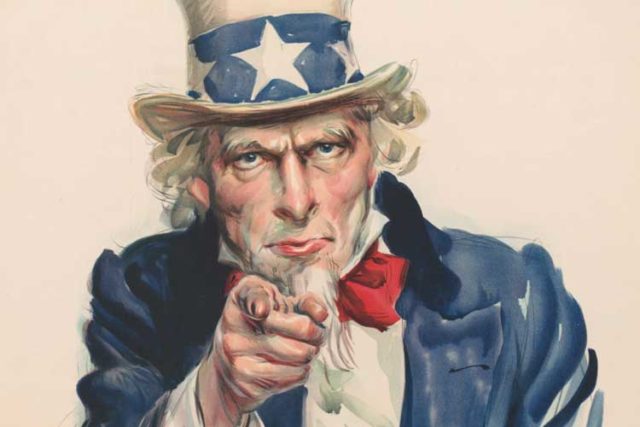 Uncle Sam wants you . . . to pay your taxes. Photo: Library of Congress
by Michael Snyder

As we find ourselves in the midst of what’s known in the United States as tax season, I tried to think of something amusing about taxes. This is the best I could do:

In one of my favorite scenes from the anarchic Marx Brothers comedy Duck Soup (which also happens to be one of my favorite movies of all time), Chico Marx plays Chicolini, an enemy spy being questioned by a government committee overseen by Groucho Marx as Rufus T. Firefly, president of the fictional country of Freedonia. A pompous minister comes forward and complains that an impending war would mean a prohibitive rise in taxes. Chicolini replies in his burlesque of an Italian accent, “Hey, I got an uncle who lives in Taxes!” The minister responds, “No, I’m talking about taxes, money, dollars . . .” To which Chicolini exclaims, “Dollars! That’s where my uncle lives — Dollars, Taxas!”

Marxian wordplay aside, a significant rallying cry during the American Revolution was “No taxation without representation.” Of course, I’m talking about the first American Revolution or, more precisely, the good one if you’re dim or insane enough to have perceived the January assault on the U.S. Capitol Building as some kind of revolutionary act rather than terrorist violence. While the representation in the Senate is hardly reflective of the population in each senator’s state, it’s been long mandated that taxes be paid by every citizen in a fair manner consistent with their earnings. Even if “fair” is debatable when it comes to the ever-widening gap between the super-rich and the rest of us, taxes are supposed to fund public services and infrastructure maintenance and repairs for the common good.

Any way you calculate it, income tax has been crucial to keeping America up and running. Unfortunately, the “conservative” standard-bearers in our legislature go out of their way to assure tax breaks for their wealthy overlords — indeed, for any of the super-rich — which is a notable factor in the crippled state of the nation’s coffers. This, in turn, has undermined the imperative maintenance of aging highways, bridges and public buildings, as well as the financing of necessary government agencies and social services that should be expected in any developed country.

The official date for individuals filing 2020 income tax forms has been pushed to May 17, due to some of the extraordinary things that have occurred over the past year and how those anomalies impacted employment and economy. Many are temporarily relieved. But knowing we have a little breathing room this year doesn’t stop the uncertain, sinking feeling that, like it or not, creeps into our lives around the Ides of March. After all, April 15, the Ides of April, the usual IRS drop-dead date for sending in your financials, generally requires weeks of sorting through a blizzard of receipts, making an in-depth analysis of one’s bank account and annual earnings (such as they are), and perhaps searching for an efficient, creative, and unimpeachable accountant. It’s all such a chore that the extra month shouldn’t really diminish the urgency. At least, it hasn’t for me.

It may seem odd or even silly to worry about paying taxes when so many have been out of work for over a year. Too many are barely hanging on via the infrequent and comparatively meager stimulus payments approved by feckless lawmakers more worried about maintaining favor with certain corporations and interest groups than addressing a crisis faced by their constituents. Numerous Californians labored to get through to the state’s Employment Development Department after hours upon days of unanswered phone calls, disconnections, and most daunting of all, dead-end referrals. These needy folks were given the opportunity to receive unemployment benefits last year — including those who are self-employed or freelancers. And they’re surely relieved to learn that $10,000 of the EDD payments won’t be taxed this time out, although anything above that sum will be. Two steps forward, and one step back.

Even if my own tax payments are piddling compared to those of the one-percenters who heedlessly leap through any loophole they can find or make for themselves, I accept the burden of funneling some of my money to Uncle Sam. In a perfect world, the old boy in the red, white, and blue suit and topper would be using the cash for the betterment of all. Now, that’s an American dream worth having. It would certainly make the pain of taxation a little easier to endure.