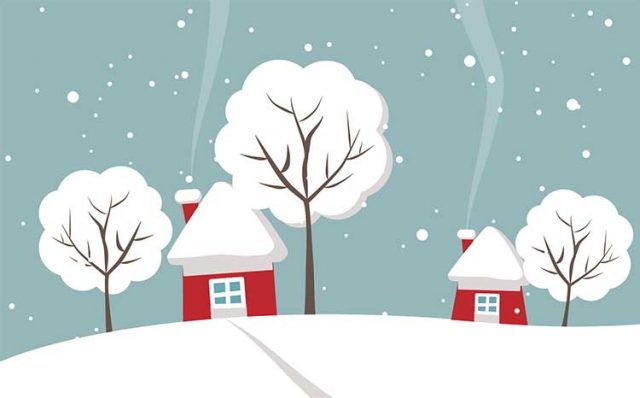 It’s a winter wonderland somewhere, even if not in L.A. or S.F. Credit: Pixaline-Pixabay
by Michael Snyder

On the road from San Francisco to Los Angeles a few weeks back, I spotted something that still seems almost alien to me after my decades as an urban Californian: Snow. There it was, cresting the high-elevation peaks along the Grapevine segment on I–5. A late autumn chill had combined with the altitude to lay a dusting of flurries upon the mountainous crests of the Angeles National Forest. Maybe it’s because I don’t ski the High Sierras, visit Yosemite in December, or travel the Donner Pass in winter, but it’s been no snow for me since moving to the West Coast — unless I venture out of state.

I am quite familiar with the white flakey stuff — and no, that’s not a drug reference. Growing up in the Northeast, I experienced wintertime as we know it from story and song. Precipitation when the temperature dropped below freezing meant snow, including enough to occasionally result in “snow days” — due to storms that are severe enough to cripple traffic and require school closures. Pro: No classes until the area dug out from under the pile. Con: Shoveling the driveway and sidewalk in front of the family house. As the owner of a plowing company in my hometown used to advertise, “There’s no business like snow business.”

Those blizzards were not any fun in-progress, but the aftermath usually resulted in me and my friends frolicking amongst the drifts, building snow forts and snowmen (or snow-ladies if the snow-breasts stayed in place), and engaging in snowball fights. Secreting a rock in the middle of a snowball was taboo in my peer group, as was tossing a pre-refrigerated ice-ball, so no one in my neighborhood lost an eye.

FREEZE TO THE MUSIC

In a light flurry, there would be the tendency to try and catch a snowflake on your tongue like one of the kids in “A Charlie Brown Christmas.” Our pre-pubescent selves sometimes licked at a handful of the frozen water and mused about adding a bit of fruit syrup to concoct a sort of homemade snow-cone — a plan our parents nixed as unhygienic. We didn’t need to hear what Frank Zappa sang about not eating the yellow snow to know what was up. Weather notwithstanding, people on the block had to walk their dogs, and it was all too clear where the yellow coloring originated.

The musical exhortation to “Let It Snow” was and still is catchy and a bit romantic. The truth of it is certainly more complicated. “Sleigh Ride” and “Winter Wonderland” will be heard ad infinitum throughout the holiday season, and somewhere a car will skid on sleet and slam into a telephone pole or worse, and an avalanche will visit destruction upon a mountain town or endanger a group of fear-frozen hikers. Still, there’s no denying the sheer beauty of a snowy blanket laid upon a landscape.

Sitting at the window of an East Village café on 2nd Avenue in Lower Manhattan late one nippy December afternoon, I looked out at the dank, gray street in the fading light of day and watched as the biggest snowflakes I had ever seen began to float down from the sky. Tompkins Square Park — longtime hangout for drug dealers, junkies and assorted lowlifes — was situated across from the café. Although the days when it was known as Needle Park and served as a destination for the detritus of society had passed with the area’s embrace of gentrification, it seemed foreboding in the twilight. Barren trees lined the walkways. Bundled-up pedestrians trundled here and there, presumably seeking a warm place — even a subway station.

As night approached, more of the mega-flakes settled on Tompkins Square, transforming it into a legitimate winter wonderland straight out of an old Currier & Ives print. All that was missing was the requisite horse-drawn sleigh making its way through a snowy forest. No Clydesdales or sleds were needed after the street lamps in the park came on. My window view became a sparkling vista in perfect tune with the seasonal songs playing over the café’s sound system, including (of course) “Sleigh Ride” and “Winter Wonderland.”

There is little likelihood that I will be seeing anything comparable this month, whether I am nestled by the Bay or in the City of the Angels. Strings of colored lights will be strewn everywhere throughout the Golden State; the designated Candy Cane Lanes will be aglow with elaborate decorations; temporary skating rinks will pop up; and representations of Santa and his reindeer will remind us that it’s a time of giving and getting presents. Snow? A no-go, unless it’s the artificial variety, and I believe that stuff is more toxic than the aforementioned yellow snow.

I guess I should find out if any of my favorite mash-up producers have combined the Mamas & the Papas with Bing Crosby and come up with the track “California Dreamin’ of a White Christmas,” because that will be my state of mind until December 25 comes and goes.

Michael Snyder is a print and broadcast journalist who covers pop culture on “The Mark Thompson Show,” via YouTube, and on “Michael Snyder’s Culture Blast,” via GABNet.net, Roku, and iTunes. You can follow Michael on Twitter: @cultureblaster