Anti-Asian hate crimes on our streets 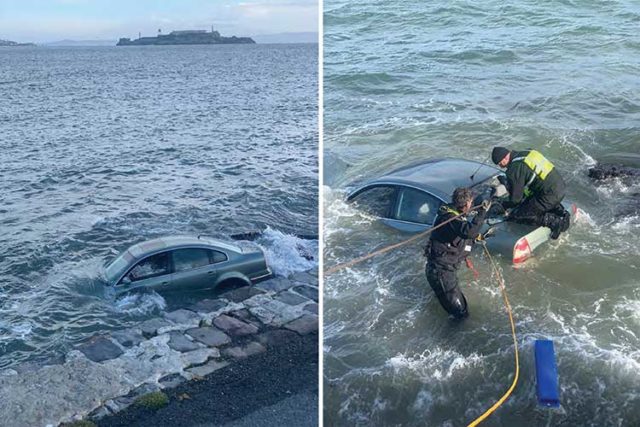 A car was retrieved from the bay following an incident near the Marina Green. Photo: SFFD Northern Station
by John Zipperer

Here’s a sampling of crimes in the districts covered by Northern SFPD station for one recent week in March.

Two people reported a hate crime, informing officers that they were in their vehicle when they observed the subjects on the street making derogatory hand gestures at them and verbally expressing a dislike for “Asians.” A subject approached the victims and told them to mind their own business; when one of the victims spoke Tagalog, the subject expressed his dislike for Filipinos and kicked the vehicle, causing damage. The victims then left the area in their vehicle.

Two officers responded to a “shot spotter” activation. An anonymous 911 caller reported a victim was entering their car when another vehicle drove by and shot at the victim. The officers could not locate the victim, but the witness said the victim was not injured and drove away before the police arrived. The officers did, however, locate multiple bullet holes in a residential structure and a vehicle in the area.

A 76-year-old Chinese man was walking along when a subject moving in the opposite direction yelled for the victim to move out of the way. The victim said the subject also made an offensive comment about him being Chinese, then shoved the victim out of the way before fleeing southbound on Gough Street. The victim complained of pain but refused medical services at the scene.

Three officers responded to reports of a battery. Two individuals were involved in a physical alteration. The conflict originated when one of the people discovered his vehicle had been burglarized; he saw the other individual, a homeless person sleeping nearby, and wrongfully accused him of the burglary. The first person pulled the blanket off the homeless person and began to punch him, causing a severely swollen eye and laceration to the face of the victim, who received treatment at a local hospital. The first person was arrested for aggravated assault and booked at County Jail.

Two officers responded to a report of someone going through mailboxes. The 911 caller provided a description, and the officers were able to locate a subject matching those descriptions and detained him.

The subject had an out-of-county warrant and was a convicted felon, which prohibited him from possessing firearms. He was arrested for the warrant and was discovered to have a loaded firearm concealed in a fanny pack, along with drug paraphernalia and stolen property. A witness said the subject had been seen rummaging through a church mailbox and a residential complex before the police arrived.

A driver in the parking lot between the Marina Green and the bay reported that another vehicle sped toward him, causing him to swerve, jump the curb, and land in the water. The driver did not appear to be under the influence of alcohol or a controlled substance. The vehicle was left in the water overnight due to safety concerns about removing it, but it has since been towed from the water.