Cats are cool. I’m talking the domesticated kind that live in relative harmony with people, not the wild predators who don’t care what you think of them as long as you’re tasty when mauled. No disrespect to dogs or ferrets or hamsters or goldfish, but if you want the most companionship bang for your pet buck with the least maintenance, a cat’s the way to go.

Sure, dogs can be loyal, bright, affectionate, and fiercely protective toward their masters and mistresses. Then again, they can be the size of a small pony — not great for the restrictions of city living when your dwelling is compact and you lack a yard — and they need a couple of daily walks for exercise and, um, relief. On the other hand, a cat is relatively petite and content to hang around the living quarters and wait for its human cohabitant to return. And the litter-box circumvents that twice-daily canine schlep around the block.

So cats are an easier proposition than dogs. Not that I would even think of having an animal pal at this juncture, even of the feline variety, since I am frequently driving back and forth between my two semi-fixed abodes — one in San Francisco and one in Los Angeles. Such regular upheaval is unkind to cats who are creatures of habit, and would be a knotty logistical hassle — at least for this human.

Am I one of the Cat People? (That’s a real thing, apart from it being the title of a surreal 1942 horror movie, the 1982 remake, and the elegant David Bowie song that was the theme to the latter.) I know my share of these folks, and I won’t pussyfoot around it. I identify. The only pets I’ve ever called my own (other than a doomed hamster named Hamlet I cared for in my childhood) were two wonderful cats: Ivory and Caffé.

Ivory kept me company at my off-campus apartment during my college years in a small Pennsylvania town. She was part of a litter born to a sorority’s house cat, and I was charmed when I saw the tiny kitten — all-white but for a tiny black spot on her forehead. I named her Ivory, after the soap of the same name and its slogan (“99 and 1/100 percent pure”). I brought her home, and in short order, I learned that she was friendly, unfussy, and affectionate. And she never trashed anything at my place with the claws that she needed for her occasional forays outside. When I graduated, I knew I couldn’t bring her with me on the year of helter-skelter travel that was ahead of me, but I was lucky enough to place her with my alma mater’s dean of students and his family. They welcomed her, and, reportedly, she lived a long and comfortable life with them.

As for Caffé and me, we bonded in a way that was immensely gratifying and ultimately wrenching. My collegiate days were far behind me, and I found myself in what would soon become a serious relationship with a kind young woman. Caffé was a rescue kitten brought home by my girlfriend J.B., who was renting a shoebox of a place on Post St. It was a bit cramped to be accommodating another creature, but the deed was done. We took to Caffé, and she to us, almost immediately. She turned out to be uncommonly smart and empathic to an almost uncanny extent, as well as incredibly calming in purr mode on a lap. J.B.’s move to a more spacious apartment on Fillmore Street gave our furry charge more room to scamper around while seldom clawing anything other than her scratching post. 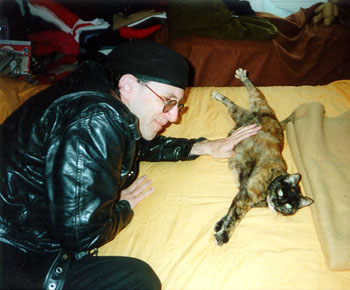 Caffé, sporting a coat of swirling brown, orange, and black and a cream-colored throat and belly, knew her name in short order and responded to about a dozen specific phrases, including “Come here,” “Get down,” and “Want something to eat?” She also knew the difference between “dinner,” “water,” and “liver treat,” and appeared to know my name and that of my significant other. To our delight, Caffé was amazingly polite when it came to interacting with us, avoiding our bed during our moments of intimacy; then, as soon as we settled in to sleep, she draped herself over us like a mother cat comforting her kittens. In a surprising example of what could be read as compassionate guardianship, Caffé would note when my girlfriend was laid low by a migraine. Climbing upon the bed, the cat would position herself between J.B.’s prone body and the door, apparently watching for intruders.

All was hunky-dory in this ménagerie à trois for a number of years, until the two humans found themselves at odds with one another. In the break-up, my girlfriend got custody of Caffé. Although I missed both of them, I stayed away for about six months, only returning to my ex’s apartment to deliver some photos that she wanted. Upon my arrival, J.B. told me that Caffé had heard my footsteps coming up the staircase of the building, became very agitated, and ran to the front door, pawing it until I entered. When I sat down in the living room, the cat leapt into my lap where she sat and occasionally looked up at me as if making certain I was really there. An emotional J.B. informed me that Caffé slept on my pillow for weeks after the parting of the ways.

When I finally had to get going, the cat followed me down the hall until J.B. called her back. As she stood there with my ex and watched me leave, Caffé began to meow piteously. I could hear her until I reached the street. My experience that day might have dissuaded me from ever having another cat in my life, if my nomadic existence hadn’t already done the job. But even without a kitty of my own, I have had the pleasure of interacting with various feline friends-of-friends — Mango, Scout, China, Spoon, Tilly, and Khaleesi — since Caffé. Excellent cats all.

If I’ve been thinking about my whiskered buddies a lot lately, it’s mostly due to the emotional turmoil endured by my colleague Debbie and my sister Sandy, who both lost beloved cats in the past month. Debbie’s Yoda and Sandy’s Oreo were both getting up in years with more than a few visits to the vet behind them when they died. That did not lessen the sadness generated by the departures, even if sizeable, spontaneous Facebook grief groups lent their support to the bereaved. I know. Caffé eventually left the world at the age of 18 or thereabouts. A void remains in my heart. Of course. Cats are cool, especially the warm, responsive ones.