In the new world of legal marijuana, San Francisco and Los Angeles go upscale in their reefer madness

Upscale dispensaries such as the Marina’s Apothecarium are becoming the norm. Photo: Courtesy Apothecarium
by Michael Snyder

When I have an evening screening in downtown San Francisco at the Metreon or Century 9, I generally time things so I can drive from my neighborhood and park on Mission Street, a block or less from the theaters, just after 6 p.m., when the meters deactivate. Convenient and thrifty.

A couple years ago, while looking for a parking space, I noticed what appeared to be a well-appointed bar or restaurant with an old-timey vibe had opened on Mission between Fifth and Sixth Streets at some juncture — possibly when I was working in Los Angeles. Whether it was a recent addition to the area or not, I felt better about parking near the establishment because a bouncer was on duty at the door.

I paid little or no attention to this new business whenever I pulled up nearby, parked, and locked my car, because I was invariably on my way to a movie and not interested in food or drink. But in early February, heading to yet another film, I couldn’t help but notice how many people were milling around in front of the door of what I soon learned was the Barbary Coast Collective.

I went over to the doorman and asked about the hubbub, and he said it’s been that way since “recreational” was passed. I took a serious peek inside and realized that what I thought was a latter-day fern bar or molecular gastronomy restaurant was actually an upscale marijuana store with an adjacent lounge.

All this time, I’ve been thinking it’s the latest downtown dive targeting the tech-lennials, but no. It’s a place to cop, as in legally buy some pot — a spectrum of fancy strains that provide various types of highs — and hash and THC oil and all manner of edibles.

The Barbary Coast (love the really-old-school privateer-evoking regional reference) has been open as a licensed medical marijuana dispensary since around 2014, according to the slew of positive Yelp reviews.

After all, California — ever the trendsetter — had become the first state to legalize medical cannabis way back in 1996: It just never dawned on me that this particular place was vending pot to those with prescriptions for so long. Now, the floodgates have opened in California with further legalization for anyone of the proper age and, one supposes, no outstanding rap sheet.

And as one might have predicted, making it legal for fun seems to have resulted in — pardon the word choice — even higher quality and noticeable price increases from the days of just medical access.

Now, I’m not much of a party animal when it comes to stimulants, depressants, hallucinogens, and hypnotics. It’s generally one beer a day (something crafty, please) during or after dinner, and a couple cups of coffee. In fact, a pint of beer followed by a double espresso is known in some circles as a Snyder speedball.

But I’m not ignorant regarding the joys of a fat joint of the good stuff. I’ve seen Reefer Madness; I know the perils and pleasures of the magic herb. I know lots of insane and hilarious nicknames that were used to describe marijuana in its more illicit days, when a codeword was necessary for dealers and their customers to avoid running afoul of the law.

We all know the tried-and-true ones: grass, hemp, rope, tea, and Mary Jane. But how about more jazz-age slang: muggles, mu, mohasky, mooter, moocah, bambalacha, Indian hay, loco weed, love weed, salad, and wacky tabacky? Ganja, chronic, bud, dank . . . call it what you will. It’ll get you stoned.

Having spent time in Amsterdam where marijuana and all other THC-bearing products have long been legal and government-regulated, I’m not unfamiliar with public, commercial distribution of what we called chiba back on the East Coast. I have vague memories of dropping into a coffee shop (as the pot-selling cafes are known there) off the Prinsengracht for an actual cup of coffee in the middle of a European trip in the 1980s and getting so ripped from a contact high, followed by a single puff from a fellow customer’s pipe, that I felt as if I were floating over the town’s numerous canals as I made my way back to my hotel.

Looking at an actual menu of cannabis products, showing all the various types and degrees of high one could attain from each offering, was quite a change from furtive dope-smoking in college and beyond. Furthermore, the intensity and the clarity of these coffee shop items, scientifically developed as if by a pharmaceutical firm and lovingly cultivated like prize-winning produce or hothouse orchids, were, in all senses of the word, stunning.

And now, the menus are available at friendly locations in some of these United States. It’s become legal to purchase recreational marijuana in nine states (plus the District of Columbia), including Oregon, Washington, and Nevada. Counting medical use as well, it’s been legalized in a total of 29 states and D.C.

I remember when it was perilous to possess a joint (let alone an ounce of weed) in the United States if you valued your freedom. From the 1960s until the turn of this century, strict law enforcement and the so-called War on Drugs led to many decent, kind, and creative people experiencing the horrors of jail time for possession of even a small amount of marijuana.

Lives were ruined for the sake of getting a little loaded. In many parts of the country, you can still face incarceration for holding and sale, and government hardliners continue to vilify any use of cannabis despite its clinical benefits. But after some states began legalizing medical marijuana use, the whole vibe changed.

Depending on where you lived, all you needed was a treatable issue, a willing physician, and a prescription, and you were good to go. Not that I needed any paper to get the occasional goody from a friend on that rare occasion when it might be appropriate, like a getaway in the woods or Halloween.

During social gatherings (dinner parties, club events, and so forth) before recreational legalization, friends with prescriptions have occasionally decided to pass me an “enhanced” chocolate-covered blueberry or gummi bear to “enhance” my experience. And on occasion, I have accepted the boon, although the potency proved daunting at least once. (Watch out for those gummi bears.)

I recall being at a restaurant in L.A.’s Fairfax District a decade ago with a crew of digital-animation heavies. After the dessert course, as we had coffee or aperitifs, one of the gang brought out a small vial of liquid and recommended each person at the table put a droplet on his or her tongue. 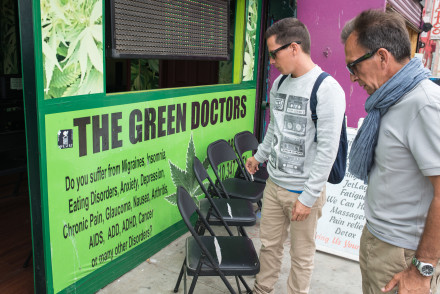 Customers of Los Angeles’s Green Doctors no longer have to pretend to be sick. Photo: WiLPrZ

Ever abstemious and wary, I inquired about the nature of the liquid. Was it LSD? No. It was a tincture of THC — and touted as extremely mild. I wasn’t driving, so I delivered a droplet to my tongue. Twenty minutes later, I felt like one of those cartoon characters that my dinner companions brought to life, but happy.

As a result of California’s early revolutionary legalization, San Francisco and Los Angeles have been at the forefront of the boutique-ing of dispensaries, and that has only continued this year.

The palpable economic effects of recreational legalization can be seen in the upscale clientele and decor of the Barbary Coast with its burnished trappings and, especially, the venue’s lounge area, which sports plush sofas and fancy hookahs.

And I couldn’t help noticing the recent relocation of one Hollywood dispensary from a shabby, sketchy-looking building a half block from tourist-and-transient-traversed Hollywood Boulevard to a more austere and imposing structure four blocks away up Cahuenga Boulevard, closer to a residential area at the foot of the Hollywood Hills. That’s definitely a move toward customers in a higher bracket, so to speak. Somewhere, Cheech & Chong are ruefully chuckling.