If you talk the talk, you better walk the walk

(Part 1 of a three-part series on the complex sometimes contentious relationship between animal shelters and activists.)

When I lost my beloved pit bull Jazzy to cancer in 2012 at the tender age of 5, I knew there would be another rescue dog in my life. When then-director of San Francisco Animal Care and Control Rebecca Katz called to express her condolences, I was sitting in my car sobbing in a parking lot waiting out a rare and sudden thunderstorm.

“It doesn’t bring Jazzy back or honor her memory to let another pit bull die in a shelter,” I told Rebecca through my tears. “I’m sure at some point you will have the perfect pit bull at ACC.”

Without missing a beat, Rebecca said, “You should meet Baby Girl, this sweet little blue nose pittie puppy surrendered the same day you lost Jazzy.” She sent a photo and a week later I picked up a puppy. It’s hard to believe it’s been five years since that day. While I still miss Jazzy and always will, I also know adopting Baby Girl (now Skylar Grey) remains one of the best decisions I’ve ever made.

As director of SFACC, Rebecca fought tirelessly to build a new facility to replace the crumbling building that wouldn’t withstand an earthquake, yet would be expected to take in every animal affected by one. She went to the media and brought then-Supervisor (now Senator) Scott Wiener on as an ally. Together, they lobbied the city not only for that new building but also for more money and more staff. Because of her efforts, San Francisco is getting that new shelter, but it cost Rebecca her job.

In July 2014, city administrator Naomi Kelly abruptly fired her, unhappy with how vocal Rebecca was about the city’s lack of support for San Francisco’s most vulnerable animals (let’s face it, politically speaking, it’s not a good look for Mayor Ed Lee and company). Rebecca wasn’t out of work for long — she took on her most challenging assignment to date as director of Oakland Animal Services, the lowest funded stand-alone shelter in the Bay Area.

Battling a reputation intertwined with that of a struggling, gritty, urban town, OAS got some of the most horrific cases of animal abuse and neglect Rebecca had ever seen. Run by the Oakland Police Department, the live release rate was only 56 percent, and animals languished an average of 31 days. OAS has an annual budget of just $3.9 million — that’s about 10 percent of OPD’s overtime budget of $30 million. In fact, most animal control agencies are the least-funded municipal department at about 4 percent — OAS gets just .15 percent.

Many of Rebecca’s staff and volunteers followed her over to Oakland, a testament to her dedication and her vision. Like she did at ACC, Rebecca immediately employed clever “free” marketing campaigns like “Home Is Where the Art Is,” the idea of a longtime supporter to have local artists create posters of long-term residents (adopters got the animal and the art). OAS also partnered with rescues such as Town Cats and developed programs like Cats on Patrol, which has placed 68 cats previously considered too feral or unadoptable in gardens, barns, warehouses, and breweries where they help control rodent populations while receiving care from the proprietors. Armed with starling statistics such as the fact some 76 percent of domestic violence starts with animals, Rebecca launched an animal cruelty task force and developed educational programs. And, of course, she continues to be an ardent matchmaker. 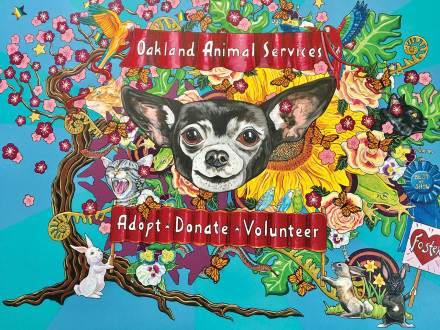 One of the many posters and murals by local artists that adorn Oakland Animal Services.

On a recent Friday morning, Rebecca takes me through the Oakland shelter where we meet dedicated volunteers socializing with dogs, cats, birds, and rabbits. Unlike private shelters, OAS must take every animal. “We once had a cow,” Rebecca says. She proudly points out the stunning murals by local artists that have brightened up the facility inside and out. “I want to create a more welcoming place so more people come to adopt,” she explains. As we enter the kennels, her ulterior motive becomes apparent. “This is Doris,” Rebecca says, opening the door to release a petite grey pit bull, “and she’s the best dog. I think Skylar needs a friend.” Indeed, Doris is special, with a huge grin, wiggly butt, and an enthusiastic tongue ready for love (more on Doris later).

As we continue chatting back in Rebecca’s office, I notice a white cockatoo wearing tropical print diapers sashaying casually across the room; she heads straight for Rebecca and uses her beak to walk up onto the table. “Remember Pineapple? She flew into a window and wound up at ACC, where she became our “ambassabird.” She came with me, too,” Rebecca says. I ask if Pineapple talks. “She says her name pretty much,” Rebecca says, scratching Pineapple’s head. “Except when I’m on the phone and she screams ‘Rebecca!’ Oh, and she dances.” Rebecca pulls up Pineapple’s favorite tune on her iPhone and Pineapple bounces joyously in rhythm.

Since Rebecca took over, OAS has seen its live release rate rise to 81 percent, and the time that animals wait for adoption has fallen to 19 days (16 for dogs). Still, Rebecca, a new mom to a baby boy, says she’s tired: “I work 16-hour days and see my baby for maybe three hours.” On top of having what many consider the toughest job in city government, there is a constant battle with local shelter activists who believe OAS isn’t doing enough. Last August, the group People Animals Love Support East Bay (PALS) went to the East Bay Express newspaper to complain that euthanasia rates had increased slightly at OAS this year. While the article leaned toward PALS, even the Express pointed out that since Rebecca took over, euthanasia had plummeted from 45 to 15 percent.

The reason PALS has turned on OAS is complex, rooted in a potent cocktail of disgruntled former volunteers and all-too-common shelter politics. But for Rebecca, it’s just one more thing distracting her organization from continuing to improve their reputation and help more animals. Also frustrating is activists often speak the loudest and do the least. “We have this dog, Booker, who is a special case; what we call a ‘project dog.’ PALS screamed and yelled, ‘Don’t kill that dog!’ We put money we don’t have sending him to a specialized trainer and a lot of effort into making sure that doesn’t happen, but when we posted that he was ready for a foster, we had 115 shares and not one taker,” Rebecca says, pulling up the Facebook page. “Dogs like Booker can’t go to just any home. They need someone who is dog savvy and who will continue working with him to set him up for success, not failure. I have all these wonderful, perfect dogs like Doris waiting for homes, so finding a home for a project dog like Booker is very difficult. That’s what groups like PALS don’t understand.”

Next month in Part 2: Are activist expectations realistic for beleaguered city shelters?

Editor’s Note: Last month’s Bay Area Pet Fair, sponsored by Pet Food Express, was the event’s most successful one to date. As of press time, over 1,200 animals found loving new forever homes — including Rebecca’s favorite, that perfect, petite pit bull, Doris. Congratulations to all the new adopters, and thanks to Pet Food Express and the rescue groups and shelters that make it all possible.