Saving King: For Rocket Dog Rescue, it’s all in a day’s work

The call from the all-volunteer San Jose Animal Advocates went out far and wide on Facebook: King, a young, healthy blue nose pit bull, was out of time. He was suffering from “kennel stress,” causing painful skin issues. The shelter felt it was better to euthanize him. Alongside volunteers like Armani Mondragon, I spent days sharing King’s story. We had a few leads, but they all fell through.

I’ve known Pali Boucher, founder of Rocket Dog Rescue, for many years. Well respected and well loved throughout the Bay Area, Rocket Dog is an award-winning grassroots group living up to their motto, “No Dog Left Behind.” Knowing how overwhelmed Pali was, I hesitated to ask her to take King. Then I got a text from Armani: “He has until 5 p.m.”

“We are in Redding,” Pali said when she answered my call, “helping with the Carr Fire.” Shelters in fire zones need to take in lost and displaced pets, so rescues like Rocket Dog take the animals already at the shelters to make room. While driving through the flame-ravaged neighborhoods, Pali stumbled upon an unexpected case — a woman who fell in her home, where she lived with 57 animals. Rocket Dog took them all. Six puppies were coming down with highly contagious parvovirus and were rushed to the vet; $9,000 later, just two survived.

At the Urban Sanctuary in Oakland, Rocket Dog has become a lifeline for the community. When members of a nearby homeless camp discovered two mutilated puppies, it was Pali they called. Christened Frigg and Freya, Rocket Dog spent thousands of dollars on emergency vet care, and then a third puppy was found. That’s when the case hit the news, and Oakland Animal Services stepped in. But Pali’s phone kept ringing. “There’s no after-hours number at any city shelter that I know of,” Pali explains. Even the Emergency Medical Technicians in Oakland turn to Rocket Dog, and not just for canines. “At 11:30 the other night I got a call about a badly burned kitten from a trailer fire. We gave the vet $1,500 to get her admitted, and the EMTs did a GoFundMe to cover the costs. They named her Ember; we call her Emmy. She’s being fostered by one of our friends.” 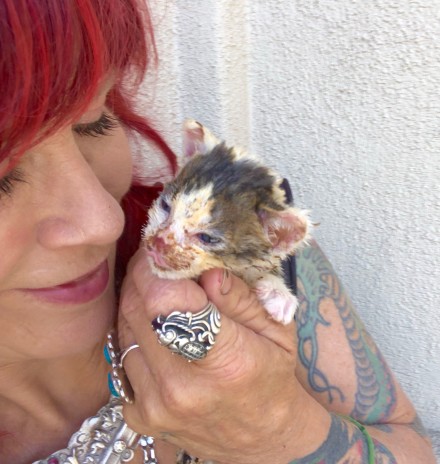 Rocket Dog founder Pali Boucher with Ember, a kitten saved from a fire.

Born to a homeless mother in San Francisco, Pali spent years addicted to drugs, living on the streets, in and out of jail. She walked the walk, and is a trusted resource for abused women in shelters, people incarcerated or in rehab, low-income elderly, and kids in foster care. “We got a call from Child Protective Services — they were seizing a girl from a house but she wouldn’t go without her pit bull. We took care of him for four months until she was able to move to a safe house. Then there was the 75-year-old woman hit by a car — we took care of her four Chihuahuas for seven months. They were in poor shape, as can happen when people don’t have money, so we got them dental and medical care. When I brought the dogs home they were literally crying as they ran upstairs.”

Which brings us back to King. “Can you get him to the sanctuary tomorrow?” Pali asked. “We’ll make room for him.” And so, a dog without hope became a very lucky dog — a Rocket Dog. A few weeks later, I met Pali for lunch at Chloe’s Café in Noe Valley, where, over a shared avocado sandwich and some blueberry-almond pancakes, she saved three dogs using her tween-worthy texting skills. “King is a big, sweet, goofy boy,” Pali says, her hazel eyes twinkling through side-swept magenta bangs. “He’s with a couple who recently lost their pittie to old age and they wanted to foster another. They love him. They’re amazing. His skin looks beautiful and he’s super happy.” 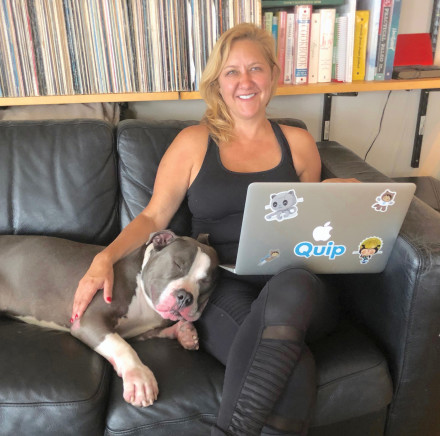 On Oct. 5–6, Rocket Dog will hold its second annual Bummer’s Ball fundraiser at the Haight Street Art Center. The event will feature an intimate performance by Pali’s friend and longtime Rocket Dog supporter, renowned singer-songwriter Emmylou Harris. Rocket Dog also hopes to partner with several Bay Area veterinarians willing to donate services on a rotating basis. “We want to find a way to be sustainable and still be available for these emergencies,” Pali says. “We have the manpower and we have the heart.”

For tickets to the Bummer’s Ball, to donate to Rocket Dog Rescue, or to adopt or foster, visit rocketdogrescue.org or call 510-842-3256. The Urban Sanctuary is located at 3561 Foothill Blvd. in Oakland and is open daily from 10 a.m. to 8 p.m.