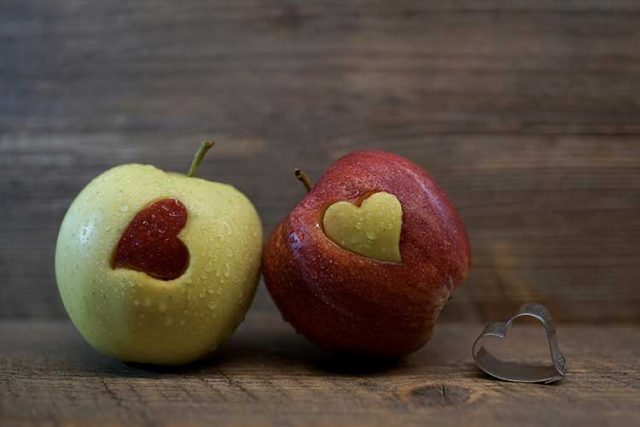 Like many of my fellow humanoids, I enact my share of rituals. They don’t particularly reflect anything of a sacred nature. Frankly, they’re usually of the tedious stretch-in-the-morning and don’t-forget-to-floss variety. But there is one thing that I do on a daily basis that’s actually an out-and-out treat and furthermore is supposed to be good for me. I’m referring to my go-to midnight snack — an apple. Late in the evening would make it “on a nightly basis,” but you get the idea. It’s not the apple of my eye. It’s the apple of my mouth!

The old saying — the one insisting that an apple a day keeps the doctor away — may not be irrefutable. Nonetheless, the fruit does have undeniable, identifiable health benefits. Apples are high in fiber, vitamins C, E, and B1, and an important group of antioxidants known as polyphenols — compounds that protect your cells from molecules that can contribute to chronic destructive conditions in the human body. There are other virtues to the regular consumption of ripe, raw apples, peel and all, that involve proper weight maintenance, a healthier gut, and a sharper brain, although my brain already worked well enough to assure membership on Team Malus Domestica (the species of tree that produces edible apples).

A few hours after dinner, I slice up a nice, firm apple of my choosing into wedges to prolong the snacking experience and keep the animalistic chomping to a minimum. And often, I bring out the jar of 100 percent organic peanut butter and smear a dollop on each slice before I gobble it down. Insofar as I’m not eight years old and carrying a boxed lunch to school, peanut butter and apple suits me more than peanut butter and jelly. Brand and style of peanut butter aside, there is one major caveat: It has to be the right variety of apple, or I am less than enthused about eating it. To that end, I give thanks to the centuries of cultivation that brought us to the 21st century range of apples that are available for sale.

Yes, they’ve been around for thousands of years — as long ago as the Garden of Eden, when that sneaky snake persuaded Eve to give one from the Tree of the Knowledge of Good and Evil to Adam, going against the wishes of the Supreme Being and leading to an unpleasant exile for the First Couple. In the interest of accuracy (or the lack of it), the Bible called it “forbidden fruit” and not anything more specific, but we often think of it as an apple. I suppose there are better examples of apples in genuine historic circumstances. How about the mid-1660s, when one hit Sir Isaac Newton in the noggin as he sat beneath a tree, leading him to come up with gravitational theory? At least, that’s what we’ve been led to believe. Who could forget Swiss bow-and-arrow marksman William Tell reportedly shooting one off his son’s head? Okay, okay. The Tell thing is just a legend that may or may not have been a true story.

Myth and apocryphal tales aside, there are certain facts about apples that are worth noting. Apples are a big deal. For instance, there are more than 7,500 types that have been bred for eating or, when pressed as cider, drinking. And each one of these cultivars, whether they’re mass produced or grown in small artisanal groves, has a unique flavor, consistency, and name. Ah, the names. They range from Abram to Zestar and can be simple, descriptive, whimsical or odd, and in a few cases, absolutely wacky.

Forget the Delicious, developed in Iowa in the 1880s as a red, somewhat sweet apple that, in its modern widespread form, is often lackluster in taste and mealy in consistency, despite the promise implied in its name. Now, consider the Cosmic Crisp, a 1997 creation in the agricultural labs of Washington State. This lightly spotted red beauty is a hybrid of two other American varieties — the Honeycrisp (with a mottled red and yellow exterior and crisp flesh with a slightly tart and honey taste, created in Minnesota in 1960) and the Enterprise (sort of an elevated Delicious, developed in Illinois in 1993), offering the best qualities of both. The Cosmic Crisp also might have the grooviest name of any apple to date — and there have been some doozies.

AN APPLE BY ANY OTHER NAME

It would be hard to outdo a pair of British apples for the sheer strangeness of their designations. The Hoary Morning, first grown in Somerset, England, circa 1819, and the Slack-Ma-Girdle, from Devonshire, England, circa 1880, generally ended up as cider. I might swig down a pint of either, but I would pass on eating a Bloody Ploughman. Originating in Scotland, circa 1800, the Bloody Ploughman purportedly got its handle when a gamekeeper shot a ploughman stealing apples that were subsequently tossed onto a compost heap where a seedling then grew.

There have been apples named Rambo, Peacemaker and Deacon Jones — which sounds like a direct-to-streaming action flick — and Elektra, Fanny and Falstaff — which sounds like a randy period rom-com. Some are labeled by point of origin, such as the Nyack (New York) and the Beverly Hills (California). Others are saddled with the likes of Holiday, Poorhouse, Drakenstein, and Magog. Evidently, I did considerable research while writing this piece. I can now confidently repeat that classic euphemism about expertise: I know my apples.

Before the advent of worldwide import and export, apples were more of a summer and autumn fruit. Now, you can get them all year long at the local supermarket, depending on origin. There’s the Fuji, initially from Japan, and the Gala from New Zealand. I’m not crazy about those two examples of basic and bland, whereas the green and tart Granny Smith from Australia is a favorite (even if I continue to wonder who she was and why she made all those apples), as is the well-balanced Pink Lady from Down Under. The aforementioned Cosmic Crisp is perhaps my number-one choice when in season, followed by the Braeburn, Jazz and Envy, three tangy products of New Zealand. And I do like a McIntosh if available. With all that apple-y goodness, there’s no excuse for not having my one-a-day.