The guilt and the glory of ice cream

The guilt and the glory of ice cream 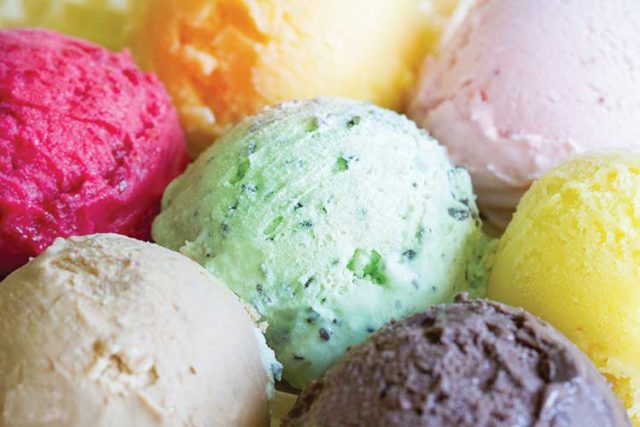 There are a multitude of flavors available for those who love ice cream, gelato, and frozen yogurt. Photo: udra
by Michael Snyder

I scream. You scream. We all scream for … low-fat yogurt. Well, some of us go for the ’gurt, because ice cream is filled with loads of artery-congesting butter fat, and no one wants to have a coronary occlusion. Nonetheless, hordes of brave souls — vegan friends excluded as per their dietary choices — dare to risk their health (and enhance their spiritual and emotional well-being) and consume one or more delicious scoops of ice cream. And I’m certain that each and every lover of the cold comfort food has a favorite brand, shop, and flavor. Make that a multitude of favorites.

I know I’m not alone when I dig into a pint of Ben & Jerry’s or Häagen-Dazs from the local supermarket to satisfy the occasional craving. The Häagen-Dazs choices are pretty conventional, even if the quality is above the generic. Vermonters Ben & Jerry have a somewhat more adventurous approach with the likes of Strawberry Cheesecake and Peanut Butter Cup; the banana-based Chunky Monkey with chocolate fudge chunks and walnuts; and an item with a Bay Area hook, the mega-popular Cherry Garcia, paying homage to the late Grateful Dead guitarist-singer and San Francisco native Jerry Garcia with a mix of cherry ice cream, whole cherries, and fudge flakes. As tasty as many of these home freezer staples might be, nothing really compares to what one finds at a beloved ice cream parlor, including those that sell gelato, the super-smooth Italian take on the frozen cow-juice treat.

Ice cream shops can be like shrines to the chilled sweetness promised within. As such, they will inspire pilgrimages. Hearing about a trip to Italy I was planning in the early 2000s, my friend Hugh directed me to make sure to visit Florence with the intention of going to one specific gelateria, Vivoli, which has been in business since 1929. You can get excellent gelato at countless cafes in public squares throughout Italy. But Florence is said to be the birthplace of gelato and a global destination for those who love the creamy delight. It’s known that President Dwight D. Eisenhower was so enamored of Vivoli’s gelato that he had drums of his favorite flavors flown to the White House for state dinners and personal consumption.

To my good fortune, I made it to Florence and dropped by Vivoli, located in the center of the city. Although there are quite a few gelato shops in Florence that offer their own specialties, Vivoli blew me away with a menu that featured some genuine surprises among more common choices. My traveling companion went for a melon and prosciutto gelato that brought the sweetness of fresh cantaloupe together with bits of salty cured ham. Not kosher, but fantastic. I went for something more my speed: chocolate orange gelato with chocolate-covered candied orange peel. Investigating the abundance of Florentine gelaterias, I discovered a shocking range of flavors, among them ricotta with figs, chocolate with hot chili and pistachio, salted caramel, rose and gorgonzola, and one called Mona Lisa that’s made with apple, orange blossom, walnuts, and raisins steeped in cognac.

That sort of wild creativity has found its way to the United States at gelato places like my friend Divina’s favorite, GIO Gelati in Cow Hollow, and is a feature at a number of gourmet ice cream chains, too. One of them is Humphry Slocombe, a locally founded company with four signature shops in the Bay Area (two in San Francisco proper), as well as a growing pint distribution network to stores in California, Texas, Nevada, Arizona, and Hawaii. The Slocombe brain trust will apparently try any ingredient to mount a memorable assault on your tongue. Their list of past and current flavors is currently at more than 130 decidedly different ones — some of which might inspire fear and trepidation in the meek. Beyond their slant on the familiar candies and fruits, consider the following examples: Apple Coded Bacon, Government Cheese, Jalapeno Cornbread, Foie Gras, and a variety of frankly intriguing beer and wine-infused confabulations. I’m more likely to go for their take on Blue Bottle Vietnamese Coffee.

FLAVOR TO THE EXTREME

Whether by the bay or in various West Coast locations from Seattle to San Diego, the outposts of Portland, Oregon’s Salt & Straw scoop shop have elegant variations on the traditional, led by Chocolate Gooey Brownie and Double-Fold Vanilla. I’ve been to the one on Fillmore Street and can attest that the more likely lures are the custom ice creams like Jasmine Milk Tea and Chocolate, Rhubarb Crumble with Toasted Anise, Sea Salt with Caramel Ribbons, Cold Brew Coffee Cashew Praline, or the more provocative Arbequina Olive Oil and Pear and Blue Cheese. Of course, not all of the mash-ups that they’ve developed in their culinary labs will work for everyone. For instance, their Berries, Beans, and BBQ Sauce is a taste too far — at least, that’s what my palette tells me.

All that fancy-schmancy stuff has its place, yet I tend to patronize more venerable purveyors, starting with the original Swenson’s on Hyde and Union streets near the crest of Russian Hill, where I’m more likely than not to order a scoop of their Turkish coffee ice cream. And there’s the oldest creamery in the Los Angeles area, Fosselman’s. Despite its longevity, Fosselman’s makes some of the finest ice cream I’ve ever eaten, providing the usual fare, plus unconventional flavors such as Brown Butter Toffee, Real Mexican Chocolate, Red Velvet, and the Pan-Asian options Taro, Macapuno, and Ube. The last time I was there, I went for the Chocolate-Dipped Strawberry — strawberry ice cream with a hint of white chocolate, studded with Guittard milk chocolate flakes. It’s not Foie Gras, but it was still pretty decadent.