The lingering guilt of the fast food fix 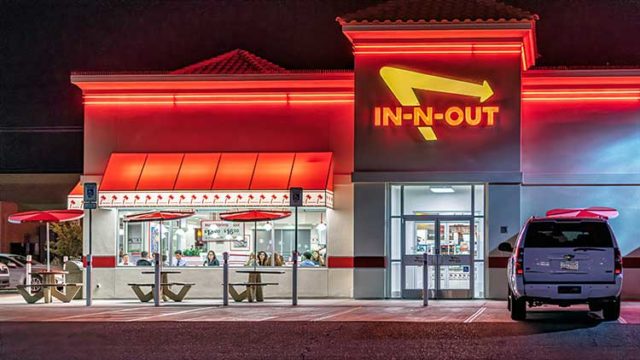 What’s the secret sauce to this diet-busting joint? Photo: trent_garverick/Pixabay
by Michael Snyder

Desperation can make ordinary people do extraordinary things. And if you’re desperate for something to eat, you might sate your hunger any way you can. Even if you’re super careful about what you put in your gullet. So I found myself starving at 12:30 a.m. after burning calories for a few hours at a dance party within the sweat-dappled walls of a steamy hotspot. Although in need of replenishment, I realized that there was nothing in the cupboard or fridge at home, no open markets, and no viable restaurants or street vendors in the area that were serving past midnight. I was forced to do something that I diligently try to avoid: Eat fast food.

I was in my car and on the hunt. The pangs were ganging up on me, the need was extreme, and the answer was looming before my eyes. It was an In-N-Out Burger location right near my apartment, and it was open until 1:30 a.m.! Except I do my level best to not consume beef or pork, and this is a business that specializes in hamburgers. Heck, burger is in the name. Vegetarian options other than French fries, which — let’s face facts — are cholesterol sticks prepared in boiling oil? Nope. No meat-free Impossible Burgers or Beyond Burgers either. In-N-Out is still old school. It would be flat disks of grilled ground beef or nothing. I headed for the drive-through, health consciousness be damned!

As I waited in line to order, I recalled what little I knew about the In-N-Out menu. Specifically, what isn’t on the menu. Sure, there’s a big illuminated list of sandwiches, sides, and drinks by the entryway to the order and pick-up windows. But In-N-Out whips up a little brand mystique and play for customer loyalty with what has come to be known as the Secret Menu. Y’know, like secret sauce — the proprietary, mayonnaise-y goop that’s liberally applied to a number of items on the Secret Menu.

And according to all my carnivore pals (all of whom swear that In-N-Out sells the best and tastiest burger of all fast-food chains), the go-to selections on the not-so-secret menu are those that are ordered “Animal Style.” You can get any hamburger or cheeseburger served Animal Style, as follows: Each burger patty is fried with mustard and comes with pickles, chopped grilled onions, and an extra helping of In-N-Out’s secret sauce to enhance the standard lettuce-and-tomato-on-a-bun — with or without cheese

You can also order Animal Style French-fried potatoes — something that sounds like a dish too far. It’s a basket of fries topped by melted cheese, grilled onions, and the requisite In-N-Out sauce. Apparently, the mess is considerable enough that it’s best eaten with a fork. The so-called Secret Menu that everyone seems to know about is also beloved for offering triple and quadruple-stacked burgers; a bun-free-lettuce-wrapped burger for the carb-wary; mix-and-match soft drinks like the lemonade-ice tea combo known as the Arnold Palmer after the legendary golf champion; a Neapolitan milkshake blending chocolate, vanilla, and strawberry shakes; and a meatless grilled cheese sandwich that none of my friends would endorse.

Being famished and not being a hard-line vegetarian, I figured there would be no harm in ordering one measly cheeseburger… Animal Style, as encouraged by my experts. I didn’t need more grease from fries. I wasn’t interested in a sugar-bomb beverage. I just wanted something in my stomach, so I wouldn’t be kept awake all night by rumbling and gurgling down below. I scored my prize to go and drove home to consume a late-night repast. As I sat down and took my first bite, I was transported.

It wasn’t quite the moment in Marcel Proust’s Remembrance of Things Past, when the taste of a madeleine cookie dipped in tea unleashes a flood of childhood memories in the author’s mind. Instead, I recalled initially hearing somebody use the expression Animal Style in conjunction with In-N-Out. At the time, I wasn’t certain about the connotation of the phrase. Did it mean that the food was served in a trough? Was it suggesting that everything was so tasty you’d be inspired to rend it with your teeth and gobble it up like a ravenous wolf, growling if anyone got anywhere near you as you feasted?

I began to think the latter might be close to the truth. The more I ate of the cheeseburger, the more I desired another one. Consuming the last morsel, I cursed myself for not ordering two. Maybe it was some kind of chemical in the secret sauce that was sharpening my appetite for more. That would be insidious … and not out of the question. Of course, I knew that I wasn’t doing my body any favors by going the In-N-Out route, even if my mind and taste buds tried to tell me otherwise. The way I understand it is that any type of fried foods — including chicken, shrimp, onion rings, and vegan burgers — can be bad for you, clogging arteries and potentially shortening your life, thereby curtailing the number of delicious dinners you’ll be able to enjoy. With that in, I made my way to bed and slept the sleep of the somewhat satisfied.

There are various types of fast food that I consume without much guilt: tacos and burritos that don’t come from a chain; salad bar offerings; and gourmet slices of pizza. My crammed schedule demands it, but burgers? Not if I can help it. Nonetheless, a couple weeks after my In-N-Out experience, I again found myself with an empty belly after midnight. In full what-the-heck mode, I went back to the same location where I first went Animal Style, and this time, I made sure to order two cheeseburgers with all the beastly trappings. Back at the pad, I was in gustatory heaven until halfway through the second burger, when I realized I had made a mistake. I still finished Burger No. 2 like a good animal, but it was too much. I felt crappy for the rest of the night and into the morning.

Never again will I ignore my self-imposed dietary restrictions! Well … maybe never again. The lure to go In-N-Out is strong. Is it the secret sauce? What’s in there anyway? To be honest, it’s probably better that I don’t know.