The trick of treats 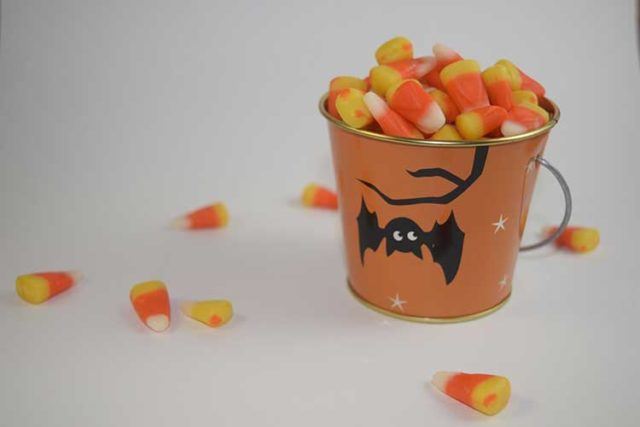 Candy corn for Halloween? There are better alternatives, Photo: sambeawesome/pixabay
by Michael Snyder

With Halloween coming up, I’ve got candy on the brain. And I am not alone. As a society, we crave candy so much that we have embraced and perpetuated the October 31st ritual of young costumed folks going door-to-door for sweet handouts. I don’t know who came up with the idea of trick-or-treating. It almost seems like a marketing strategy conceived by Willy Wonka in collusion with those talking M&Ms. The origins of the tradition aside, a lot of candy will be bought, given away, and eaten by the end of the month.

Let’s be honest here. Who doesn’t love a bit of candy now and again? When we were kids, we had to endure horror stories from concerned parents and elementary school teachers warning us of the deleterious effect of candy on dental hygiene. But we’re older and wiser now. Those of us who know how to moderate our intake of sweets happily engage in the occasional indulgence — and we have our favorites.

As an enthusiastic trick-or-treater traipsing through my neighborhood, I was pretty particular about what I wanted to see placed into my goody bag. In fact, I’d have preferred an apple with a razor blade in it than a “fun-sized” box of Good ‘n’ Plenty — no fun there — or a piece of molar-pulling toffee. Almond Joy and Mounds bars, largely congealed coconut? Are you nuts? As for the bland, mealy textured, neutral-tasting abomination laughingly mislabeled candy corn, the tiny evil wedges should be shucked into the garbage. With all of that detritus being passed my way, I thanked the spirits for a mini-Snickers or Mars Bar, a Hershey bar, Hershey’s kisses, or even a packet of those M&Ms. Yes, please. Chocolate for the win!

Even more so now that I’m a discerning grown-up with a refined palate, there are plenty of different types of candy that I outright refuse to eat. Although I will snack on an anise-flavored Italian cookie, I hate licorice sticks and whips, whether red or black; thus I hate the aforementioned Good ‘n’ Plenty, the white and pink licorice pellets that seem to find their biggest constituents at the movie theater concession stand. Along similar lines, I hate chocolate malt balls, even if certain varieties of chocolate delight me. In the instance of the malt ball, the malt interior cancels out any virtues to the chocolate coating. Malt in beer? Yes! Malt in crunchy ball form? Nope.

Skittles, with “fruit” flavors that taste of the lab where they were created, and Spree, where the most notable natural ingredient is natural wax? Nuh-uh. The chalky blah of Necco wafers? Pass. Gummy bears and gumdrops and, to a lesser extent, jelly beans taste so artificial, and they do play havoc with one’s teeth. And I hate jawbreakers, lollipops, and sourballs. They all suck, especially since they make us suck too. And the “break” part of jawbreaker? That’s where the dental red-flags really fly. Sorry, Grandma. Keep that bowl of hard candy away from me.

As suggested by my acceptance of certain items acquired during my youthful Halloween night rounds, chocolate is in my sweet spot. Better yet, it is my sweet spot. Of course, I’m picky about what sort of chocolate. And therein is a story.

Prior to my first visit to London, an English friend insisted that one of the things I must do when I got there was to find a soft-serve ice-cream truck — the U.K. equivalent of Mr. Softee. I asked him if that would be “Duke Softee” or “Baron Softee.” He smirked and said that I simply had to go up to the window of the truck and order a 99 Flake. That sounded like the name of a grunge-rock band to me. He agreed, but insisted it was nothing of the sort and that I would thank him for the suggestion.

While on a stroll through the British capitol on a warm spring afternoon, I spotted one of the soft-serve ice cream trucks parked outside the Royal Albert Hall. Approaching the window, I ordered a 99 Flake and was presented with a cone that had a partially unwrapped Cadbury Flake milk chocolate wand stuck in a swirl of soft vanilla ice cream. After each lick or two of ice cream, I nibbled on the choco-stick, I was well chuffed, as they say over there — which translates as quite pleased.

A few years after that U.K. trip, I was excited to learn of the Candy Store — a Russian Hill business that opened on Vallejo off Polk. Still in business at the same location, the Candy Store specializes in confections of all sorts: classic sweets dispensed form old-fashioned jars; regional American favorites that are hard to find on the West Coast; and brand-name confections from around the world, including various items normally only available in other countries. On my first visit there, I spotted a Cadbury Flake, exactly like the one that came in the 99 Flake cone, and eagerly purchased it. I peeled away the wrapper, and prepared myself for a Proustian moment of remembrance. I bit into the wand. The chocolate was fresh, but in the time since my introduction to the 99 Flake, I had been introduced to the glories of dark chocolate. Upon revisiting it, the milky and, yes, flaky texture of the Cadbury Flake was a disappointment.

We now know that eating dark chocolate, light on the dairy products, has health benefits such as being a great source of antioxidants, raising HDL, lowering blood pressure — and inspiring romantic thoughts. Plus, dark chocolate tastes so delicious and lends itself to infusions of coffee, berry, chili pepper, and other natural additives. Personally, I prefer it bittersweet and made with at least 70 percent cacao beans — the prime component in chocolate.

It doesn’t have to be Halloween to give someone you love a variety box of See’s chocolates with all of the frou-frou fillings. But when I want to treat myself on a regular basis, I’m perfectly happy getting a chunk of artisan dark chocolate from the Bay Area’s own Ghirardelli Chocolate Company or from relative newcomer Dandelion Chocolate or something comparable in a bar from Whole Foods or Trader Joe’s. Candy that’s good and good for you. What a concept!