To bond is human — and don’t forget the animals 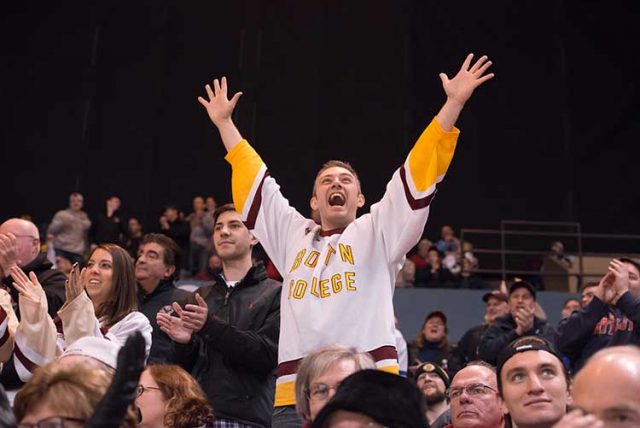 One of these people is a banker, three are students, one is an art critic — but what brings them together is sports fandom. Photo: chelseaouellet/Pixabay
by Michael Snyder

Bonding can be joyful. It can be gratifying. It can also be a source of relief. And I’m not talking about the satisfaction one feels when the superglue dries and that which was once broken is securely bonded together. I mean kinship, loyalty, compatibility, and ease in company between folks, regardless of (and sometimes because of) age, gender, race, spiritual beliefs or political bent, no matter how bent.

Lately, I’ve been thinking about what bonds human to human. Not a love connection, per se. Just connection. There are shared interests, common backgrounds, similar challenges, and simple yet indefinable chemistry, including sexual attraction.

Music is an obvious passion that brings people together for the long haul, particularly when they like the same artists — and I mean really like them to the point of getting together to attend live shows, swapping bootleg recordings, and constantly comparing favorite tracks or concerts. On Facebook, there was a recent flurry of excitement from a bunch of friends who were Goth-rockers in their younger days and still follow the musicians who embodied the genre. To a person, these generally sensible folks went bonkers over the spring tour by a resuscitated Bauhaus — the arty, dark U.K. rock band best known for the pulsing, funereal track, “Bela Lugosi’s Dead.” Bela may be dead, but Bauhaus is alive, and the online bonding over the group was profound.

An even greater equalizer is sports fandom. Although punk-rockers and country-rockers are pretty different from one another, there’s generally a homogenous quality within their respective flocks. When people root for a specific professional or collegiate team, there’s an implicit fraternity among them, but the individual fan could be a lawyer, a clerk, a waiter, a teacher, a construction worker, a chauffer, or an artist. Nonetheless, a Giants, Niners or Warriors victory experienced at a sports bar can result in many high-fives, much hugging, and copious toasting between strangers who may not be from the same social stratum, vote for the same candidates, or have the same worldview on other matters.

Yet, they’ll behave like lifelong buddies at the next game they watch together at that watering hole.

It seems like the possibilities are as endless as the types of cuisine from various points on the globe. Recently, I’ve been meeting a veritable tribe of folks who simply crave pizza — in gourmet or standard regional styles like New York, Chicago and Buffalo — on a regular basis and gather every Sunday at a different pizzeria in the metropolitan area to sample the wares. I’ll admit to being one of these pizza fanciers who benefits from the variety of pizzas that we split amongst ourselves. But there are also subsets of people in this expanding group that impart knowledge about other types of restaurants devoted to other types of food that I adore. So I now plan to get together with one person for Asian dumplings, with another for enchiladas mole, another for pad Thai, etc.

My late friend Robert and I would hang out every Wednesday afternoon at a Sunset District comic-book store similar to the one in North Beach where we first met. During that initial encounter, it took all of five minutes to realize that we both had an appreciation of certain Golden Age comics, the TV shows Doctor Who and Buffy the Vampire Slayer, and (call back!) the mighty San Francisco Giants. In a very short time, an office worker and a journalist bonded in a major way. And yes, we went on to bond over our favorite James Bond. (Sean Connery, of course.) We never socialized other than at the comic book store. We didn’t need anything other than an hour a week at the comics rack to talk about his discovery of an old issue of Blackhawk from the 1940s, the virtues of the latest Doctor Who episode, and what that rookie infielder can do to stop striking out.

At its most visceral and primal, bonding can even happen between humans and animals. Ask a zoologist, and at the drop of some spoor, he or she will tell you that animal senses and sense memories are often more powerful than those relied upon by us humans. For instance, one woman I know has a deep and abiding relationship with a goose. Hi, Whitney! Hi, Wawa! (In case there’s any confusion, Whitney’s the woman, and Wawa’s the goose.) Time away from the farm does not lessen Wawa’s honking and nuzzling ardor toward Whitney upon their reunion. And apparently, what’s good for the goose is good for the kitty.

I was hanging out at a friend’s house the other day when the eldest of his four cats emerged from a side room that serves as a de facto feline condo on the property. For the record, my pal and his girlfriend are animal lovers who are more than happy to care for the furry creatures, although they have now reached maximum cat-pacity. Anyway, this particular male named Charlie is a stocky black and white fellow with an aversion to strangers. So my friend’s significant other was surprised to see Charlie amble up to me, meow, and rub against my leg. What she didn’t know was that Charlie and I had bonded some years before, and my pheromones or whatever remained in his molecular data bank.

As we all struggle to cultivate and maintain friendships amid the detachment of this digital age and the dislocation and isolation of rolling pandemics, bonding can and does give us camaraderie and purpose. It’s a laugh when you’re down and a cool drink when you’re thirsty. I, for one, relish all of my bonds — from the frivolous to the deep. If they come and go and I’m feeling the void, there’s always the pet store.