‘Twas the night before Thanksgiving 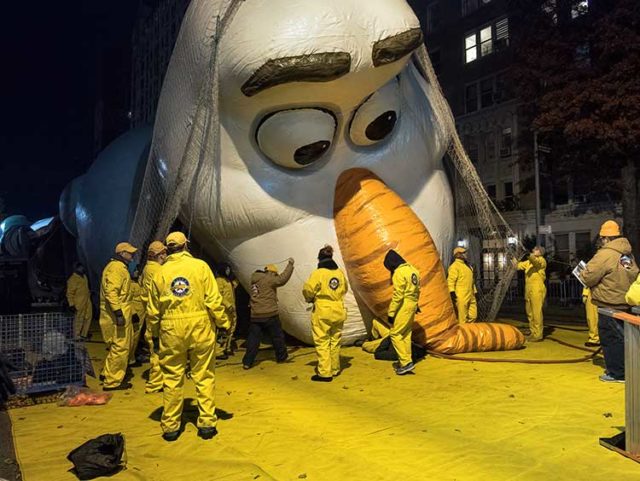 The day before Thanksgiving, the parade floats are inflated, Photo: Rhododendrites
by Michael Snyder

For all the fuss we Americans make over Thanksgiving with its mandatory knee-jerk-cozy gatherings around a stuffed bird and side dishes of questionable taste and nutritional value, let us consider the night before. It can actually be more of a holiday than the holiday itself.

If you left the nest and ended up far afield, the day before Thanksgiving is traditionally devoted to travel for those seeking to reconnect with loved ones back at the old homestead. In my recollection, those trips are often harrowing at best, in the vein of the Steve Martin-John Candy comedy Planes, Trains and Automobiles, and probably more problematic in these days of TSA access control, proof-of-vaccination, and mask mandates. Factoring in the nature of transit on that day and the potential stress of the gatherings to come, the better choice might be to stay where you now live and get together with comrades or relatives in the area — maybe go the solo peace-and-quiet route until the festivities are over.

If you do hang close to home or if you reach your destination in time to settle in, that Wednesday evening is an ideal time to meet friends at a local bar and try the seasonal drink specials. Not that I would suggest ordering a Yam Daiquiri or a Gravy Martini. But anything with “Cranberry” in the title should be okay. Wherever you and your buddies gather, it will be an oasis of calm or a goodtime blowout offering a respite before you have to deal with your passive-aggressive parents, your more-successful-than-you siblings, your arch-conservative uncle, or your disgruntled cousins around the dinner table.

In my experience, the night before the purported feast of gratitude is generally way more fun and worthy of thanks than anything that happens on Thanksgiving itself — unless your favorite NFL team wins one of the annual Turkey Day clashes. And there are even magical things that can go down in those after-dark hours leading up to the usual bout of overeating and recrimination.

Decades ago, I was in New York City for a short getaway prior to taking a train to South Jersey on the morning of Thanksgiving in time to get to my parents’ house for dinner. I would be spending a few days with the family, but would head back to the Big Apple for Saturday and Sunday carousing with my Manhattan crew before taking a flight back to San Francisco on Monday.

So there we were, four of us, dining and drinking at the Odeon in Tribeca on that Wednesday night. It was 9 p.m., and we were about to have dessert. I was washing down my duck a l’orange with an Anchor Christmas Ale, a little taste of the Bay Area that had made its way by bottle to the East Coast, when my date Alison had a brainstorm. It was the perfect moment to grab the subway uptown and get off next to the Central Park staging area for the Macy’s Thanksgiving Day Parade — where they were inflating the giant balloons that are a trademark of the extravaganza! Our companions begged off, having each had one too many cocktails. I, on the other hand, was ready to roll.

After we paid our check, Alison and I braved the nighttime chill of late November, found the nearest subway entrance, and descended underground to the station and platform where the warm, dank air was redolent of that unmistakable, visceral scent of big-city humanity crowded into electron-charged public transportation. Within a matter of minutes, the subway came, and we were on our way. Arriving at our stop, we climbed to the surface and were confronted by a surreal vista.

Right near one of the park entrances, a troop of parade employees busily pumped helium into a block-long line of rubber leviathans. There were massive representations of renowned characters from cartoons, movies, and children’s literature, as well as commercial mascots and a few novelty balloons: stars, an ice-cream cone, pumpkins, poinsettias, and more. The gargantuan icons — Woody Woodpecker, Pink Panther, Sonic the Hedgehog, and Betty Boop among them — were in various states of inflation, which was strange and sometimes hilarious.

A partially-filled Barney the Dinosaur was flopped over Big Bird in what seemed to be a sort of bizarre interspecies intimacy. A number of them were almost good-to-go. An enormous Bart Simpson appeared ready to skateboard right up Spider-Man’s massive leg. Snoopy and Woodstock were in a prime spot to harass Garfield the Cat if the spirit — and their handlers — moved them.

The crowd that had gathered to watch the proceedings wasn’t uncomfortably large, and everyone was in a joyful mood, rooting for favorite creatures to grow before their eyes, swigging brown-bagged booze or passing around flasks, and, in general, exuding a spirit of fellowship and cheer. Steam swirled up from manhole covers and encircled the entire tableau, further enhancing the sense of being in a dream. Alison and I were dazzled.

As amazing as it was to witness, an hour of observation in the falling temperature was quite enough, and we took the subway back to Alison’s apartment. I had to get up early to catch my train, and she was going out to Long Island to dine with her own folks. We said our goodbyes.

Finally reaching my parents’ house and seeing the dozen or so relations I would have to politely interact with until the food comas kicked in, I girded myself.

“You seem to be in an exceptionally good mood,” my mother said as she greeted me. “You normally treat these get-togethers like a chore.” It was then I realized that a smile had been affixed to my face since the Central Park excursion with Alison.

“Thanksgiving isn’t so bad,” I told her, “as long as you get it all in the proper perspective the night before — and don’t blow anything out of proportion.”